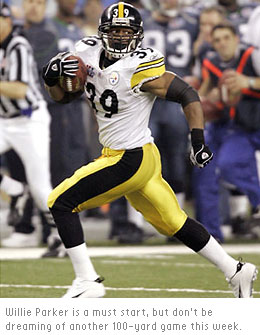 Pittsburgh at Carolina – If this were Week One, the talking heads (wait, am I a talking head too?!) would have touted this one as a potential Super Bowl matchup. Let’s go back to better times. Ah yes, just magical. Err, anyway, I actually think Ben Roethlisberger is a decent start this week. The Panthers’s pass defense has been taking it on the chin lately, and I expect that to continue. Willie Parker has turned himself into a must start, but I’d temper expectations since he hasn’t had two straight 100-yard rushing performances all season. Hines Ward is coming back from injury and immediately is a weak second or strong third wide out. Even Santonio Holmes should be worth a flex play.

It seems as though Chris Weinke will be starting for Carolina again. Call me crazy, but I just don’t see another 400-yard passing effort in the offing. In fact, I think he’ll struggle to get half of that. Steve Smith is a start, but don’t get fooled by Drew Carter’s big game. Yes, Weinke and Carter probably have some rapport from working together often in practice, but Smith is the better wide out. Carter shouldn’t be able to find open spaces like he did last week.

Tampa Bay at Chicago – Wow, thanks for playing, we’ll see y’all next week. Umm, seriously though, there’s really nothing here. Muhsin Muhammad is a third wide out, while Thomas Jones and Cedric Benson are both flex players. Whatever the over/under is in this game, I’d take the under.

Washington at New Orleans – Is it possible that Ladell Betts is just a better running back than Clinton Portis? Okay, that’s probably a bit over the top, and Portis was certainly a better touchdown threat, but Betts has come in and done a nice job. I’d keep on rolling with the former Hawkeye. Santana Moss has been a big bust this season, but he is always a threat for a long touchdown. Consider him a weak third wide out start.

Talking about wide receivers, the Saints remain a great source of fantasy starts. Marques Colston and Joe Horn are having injury problems, however, so monitor how they do. If they can’t go, Devery Henderson and Terrance Copper become good fantasy starts. Deuce McAllister and Reggie Bush, meanwhile, have become the second best running back duo in the league. (Behind Fred Taylor and Maurice Jones-Drew of course) Both are too dangerous to sit, unless you have prime guys ahead of them.

Denver at Arizona – I’m going to take a leap of faith and say the Cardinals win this one. Jay Cutler played a lot better last week than he did in his first start, but he’s still the weakest starting quarterback in the league right now. Tatum Bell is a good option if you need running back help since the Cardinals run defense is, well, your standard Cardinals run defense. Javon Walker is a guy you might have to start, and he is capable of a long touchdown, but temper expectations.

Arizona has won three of its last four games. Let’s hear it for the red and white! Larry Fitzgerald has been the most consistent Cardinal since he came back from injury. Edgerrin James has also been able to work out the early season demons. Unfortunately, the Broncos have a stifling run defense, (3.9 yards per carry allowed) which scares me off from starting James. He’s a surprising sit. The other interesting play here is Anquan Boldin. With only three 100-yard games this year, it’s definitely been a disappointing campaign. Still, I can’t advise sitting him. The Broncos pass defense is regrettable, and I’d assume Champ Bailey will spend most of the day on Fitzgerald. It strikes me as a good matchup.

Philadelphia at N.Y. Giants – Remember how last week I said Jeff Garcia wasn’t a terrible start and he should get a couple touchdowns and we gasped and had a good laugh? Well, consider that back in effect. The Giants pass defense stinks, so Garcia should toss a couple of scores. Dont’ Stallworth and Reggie Brown are the main targets, and at least one of them will catch a touchdown.

So Roethlisberger’s happier time included Kelly Clarkson. Michael Strahan’s happier time has Tom Arnold. You win some and you lose some, Mike! Oh well, Tiki Barber is riding somewhat-less-than-triumphantly off into the sunset after this season, but he’s a good start this week. Everyone slices and dices the Eagles run defense. Plaxico Burress might get a touchdown and I expect a good game from Jeremy Shockey. Other than that, avoid the Giants like you avoid watching The Best Damn Sports Show Period.

St. Louis at Oakland – Start Steven Jackson. The potential top three fantasy pick next season is a stud. He can beat anyone, and he should destroy the Raiders weak run defense. The Bengals showed the world last week that Oakland’s top ranking for pass defense might be a bit undeserved. Marc Bulger is worth a start, but I’d still consider it a weaker one. The only Rams wide out I trust at the moment is Tory Holt. And don’t start any Raiders.

Kansas City at San Diego – Two offenses that have been mirror images of each other for a few years now face off in what could be the most entertaining Sunday night game of the season. Both teams have great running games, dominating offensive lines, and a top flight tight end. It seems to be the new trend in the NFL. (49ers anyone?) Other than the ‘you-know-whos,’ Philip Rivers has a good chance at two touchdowns and Trent Green should at least do better than last week.

Cincinnati at Indianapolis – How does ESPN go 14 weeks with matchups that are just terrible on paper, and then pull out this doozy in Week 15? It makes no sense! Carson Palmer, Peyton Manning, Rudi Johnson, Chad Johnson, T.J. Houshmandzadeh, Marvin Harrison, Reggie Wayne and maybe Chris Henry. I need some oxygen. Rock On!

By Andy Goldstein
This entry was posted on Saturday, December 16th, 2006 at 3:30 pm and is filed under Andy Goldstein, FOOTBALL, Gridiron Goldstein. You can follow any responses to this entry through the RSS 2.0 feed. You can leave a response, or trackback from your own site.