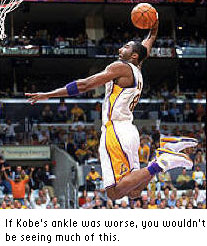 Laker Nation missed a collective heartbeat. Jack might have even taken off his sunglasses. Such is the value of Kobe Bryant to LA and when he was fallen by a sprained ankle last night, everyone assumed the worst. Kobe, however, says it’s not nearly as bad as it might have been and he’s only considered day-to-day. We bring you up to speed in today’s Daily Dose.”

Melo keeps dominating and keeps winning the Player of the Week Awards; Corey Maggette is not on the trading block — apparently; Eddie Griffin tells the Kwik-e-Mart people he’s drunk; Kyle Korver is not ready to return; and Chris Bosh gave the Raptors and their fans a scare yesterday.

We’ve got all of this and plenty more fantasy basketball notes in today’s Daily Dose.

By RotoRob
This entry was posted on Tuesday, December 5th, 2006 at 10:19 pm and is filed under BASKETBALL, NBA Daily Dose, RotoRob. You can follow any responses to this entry through the RSS 2.0 feed. You can leave a response, or trackback from your own site.