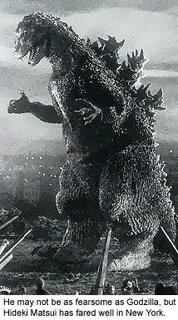 We lead off this week’s Dear RotoRob segment with a letter all the way from Japan from Satoshi, who wanted to know about one of his country’s greatest exports. Sapporo beer? No, although, damn, that’s some fine brew. No, Satoshi was interested in the man they call Godzilla, namely Hideki Matsui.

Hello. I am a Japanese student. My name is Satoshi Okumura. I go to Kwansei Gakuin University in Hyougo. I investigated Hideki Matsui. Your address was there. I want you to answer three questions. Please tell me your opinion:

Thank you. I hope to hear from you.

Thanks for the note. Always great to hear from readers in other parts of the world. I used to get a ton of mail from Australia, but haven’t in a while.

Hideki Matsui has been simply fantastic since arriving in North America. Although he wasn’t able to duplicate his massive home runs totals from Japan, Godzilla has quickly developed into a tremendous ballplayer.

His chief strengths are power, run production, batting eye skills, and the ability to hit for a high average, something he continues to improve at.

Although he was injured for much of last season, he was drawing walks at the fastest pace he’s ever shown, and Matsui’s batting eye was through the roof, with more walks than strikeouts, an impressive feat for anyone, but especially for a power hitter.

I assume you’re asking about how he’ll do in 2007 rather than how he did last year. If that’s the case, I think now that he’s fully recovered from the broken wrist, Matsui will continue to step up in batting average. It wouldn’t surprise me if he hits close to .320 this season, and if he continues last season’s trend to hitting more flyballs, he should again top 30 homers, maybe more.

As for why he came to the major leagues, I think that there’s still the perception, rightly or wrongly, that major league baseball is the pinnacle of professional baseball and you’ve haven’t truly conquered the sport until you make it in MLB. Certainly, Ichiro’s great success here helped pave the way and break down the misconception that a position player couldn’t succeed here. The globalization of the sport has been one of the more satisfying trends over the past decade, because the chance to see stars from Japan and other countries play in the majors has been fantastically rewarding. And from a fantasy perspective, it’s opened up a whole new challenge in terms of scouting and evaluating players that we have never seen.

And Matsui is still a huge star in Japan, of course. I just read in The Daily Yomiuri that he can command 170 million Yen for a commerical.

I like the roto breakdowns and anyone reporting on the Raps (giving us more pub on the net and hopefully helping us graduate from Basketball U). A little waiver wire assistance, please?

In reading some opinions and scanning the waiver wire, I wonder if guys like:

Kyle Lowry, Earl Watson, Ronnie Brewer, Martell Webster, Bostjan Nachbar (although with Richard Jefferson back…) would be worth the pickup at the expense of someone off my roster? I do need some additional assists, and have been hampered so far by some lackluster performances (fantasy-wise) of a few. Drop Fisher for Watson, e.g.?

And FYI, I got the “Buy Low” trade offer of Ricky Davis for Diaw today… and I think I’ll pass on that one! And I was really high on Ike Diogu’s potential in the preseason, but I think his injury, plus the play of Andris Biedrins and Mickael Pietrus has set him back. Still not sure if I want to “sell high” on Martin yet, but if Bell and Diaw pick it up, I would consider.

Glad you found and are enjoying the site’cheers.

Of the players you mentioned, obviously forget about Lowry now that he’s hurt and may miss most of the year. Watson could be intriguing if he just had more clear-cut PT, although he has seen fourth quarter action recently. If he gets dealt (Miami?), get ready to pounce.

Brewer looked like he might offer some very short term value as he’s capable of scoring, but AK-47 is coming back. I’m not hugely sold on Webster for the immediately foreseeable future; love him long term but you need help now.

Nachbar might also put some points up for you. He’s been a pleasant surprise off an improved Net bench.

If you’re desperate for assists, Watson may be your man, even though Fisher’s doing well right now and is a very streaky player, plus is guaranteed more PT than Watson (at this point, anyways). Fisher also offers more scoring potential, but again, that streakiness.

You could always look into Eric Snow if you’re really desperate. You know he’ll play, at least, and he doesn’t commit turnovers.

Have you thought about packaging up a player or two from your strong categories for a bigger assist man? Someone like T.J. Ford may come cheaper than the big names because he’s essentially a one-cat dude.

As for the Davis-Diaw offer, Davis is still scoring like a fiend, but Boris is shaking off the rigor mortis, even though the boo birds are out in Phoenix. You’re wise to wait him out.

A lot of people were stoked about Diogu, but the ankle injury has derailed that. However, don’t give up hope. The Warriors are desperate for rebounding help, so he may be a factor yet. And least keep your eye on the situation.

***
Next up Kael wrote in about a high-risk, high-reward trade offer he made.

I just offered someone Elton Brand and Udonis Haslem for Marcus Camby and Kevin Martin. Am I too much of a gambling man? Brand’s killing my FT percentage and I’m mid pack in FG percentage. Looks like Camby and EB are basically square in rebounds, blocks and steals. I’m lagging in steals, assists, points and FT percentage.

Would appreciate your input.

On paper though, you’re getting the best of this deal, even though you’re giving up the best player in Brand. But the risk you take with Camby (injury) and Martin (at peak value) is a scary proposition.

I hate to give up Brand, especially as he begins to play better — and note that his FT percentage is going up as he’s hit 14-of-19 in the past three. Remember that he shot 77.5 per cent last year and is over 73 per cent in his career, so his struggles this season are an anomaly; it’s early. He’s admitted to being tired, but is a really hard worker and will do whatever it takes to get better.

As for Haslem, once Shaq gets back, the ridiculous PT he’s getting now will be trimmed some. But at least he kept his job in the lineup shakeup.

You didn’t mention whether you need the blocks that Camby provides, because they may be even now, but he’s definitely going to surge past Brand in time.

As for Martin, the guy just keeps scoring (see what he did last night? Woah) and he’s even rebounding more this year as Sacramento is trying to get everyone involved on the glass.

Having said that, the deal is good for right now if you’re willing to take these risks: Camby will go down; Martin will cool off; Brand will get better.

Amr wrote us with some very specific category requirements.

I am playing in a daily league that has these nine categories: FT percentage, FG percentage, 3-points made, Points, Boards, Assists, Steals, Blocks and Turnovers. I’ve lost three weeks straight and I am already down this week. I think that my team is solid, however my record shows otherwise at 11-16. Every week I am completely destroyed in four of the categories — FT%, 3PM, Blocks, and TOs, and on top of that I usually end up losing steals by a close margin. Should I try to make some kind of multiplayer trade? I don’t know what to do, please help! Below you will find my roster.

We start eight players as you can see above.

On paper, that looks like a great team. At first blus, it’s tough to see just how you could be losing.

Now it’s really hard to find someone who can help you in every area you need assistance in, but here’s my advice:

You should target one of Dirk Nowitzki or Shawn Marion. I’d suggest offering the Nowitzki owner Paul and another strong player for a weaker option in a two-for-two deal.

With Marion, offer him Ford and something else pretty good for a weaker option in a two-for-two deal.

You need one of those two to help balance things for you.

To round out the week, Carlos is weighing a trade as he looks to add scoring.

Should I give away Mehmet Okur for Allen Iverson?

I need some points. I have Troy Murphy, Andrei Kirilenko, Chris Kaman, Tyson Chandler and Alonzo Mourning for rebounds.

If you’re okay in rebounding without Okur, then this deal is a great move for you.

Okur is capable of double-doubles all the time (six in the first 12 games), but you have rebounders on your team to cover your ass there.

If scoring is your main need, this is a slam dunk. But there are other considerations. Do you need the help in assists? If not, then that could free you up to trade someone else on your team who gets a lot of assists for another rebounder. Can you take the hit in field goal percentage that Iverson nails you with? To some extent, that will be negated by the Answer’s superior free throw shooting, but you don’t mention if either of these areas are a concern.

And finally, you’ll also be getting a nice boost in steals with this deal.

Speaking of which, if your primary concern is scoring, this deal is a steal!

By the way, Iverson returned last night and put up a season-high 46, so you better close this deal before the other owner gets cold feet.

By RotoRob
Tags: Godzilla
This entry was posted on Saturday, November 25th, 2006 at 9:29 am and is filed under Dear RotoRob, RotoRob. You can follow any responses to this entry through the RSS 2.0 feed. Both comments and pings are currently closed.