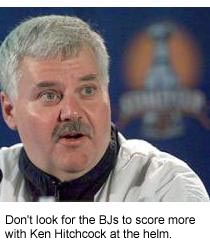 The big news of the week, of course, is the signing of Ken Hitchcock to go behind the bench in Columbus. What happens now? Well, considering the BJs couldn’t score before, adding a defensive-minded coach won’t make them score any less. In fact, Rick Nash and Co. will probably score a little bit more once they adjust to Hitchcock’s system because they won’t spend so much time running around in their own zone. The playoffs may be out of reach, but look for their overall numbers to improve a bit, including goaltender Pascal Leclaire.

How bad can the injury situation get for Minnesota? First Marian Gaborik is out, now Pavol Demitra has yet another concussion. If the Wild are smart — and safe — they’ll make sure Demitra stays out as long as he needs at the expense of whatever their on-ice needs are. Just ask Tim Connolly about long-term concussion problems.

The San Jose Sharks have finally been bit by the injury bug. Jonathan Cheechoo should return in the next game or two, but things are a little bit more unclear with Milan Michalek. The good thing is that Michalek’s injury is his arm, not his knees, which were the source of his problem a few years ago.

Sidney Crosby’s out with a minor groin injury, so it’s up to Evgeni Malkin to score all of the goals in Steeltown.

Welcome back Shane Doan into the Phoenix lineup. Don’t look for that to turn around the Coyotes’ dreary season though.

A pair of old fogeys are on fire — Rod Brind’Amour and Teemu Selanne are among the league’s leading point getters over the past week or so. Another pair of vets aren’t too far behind in Mark Recchi and Geoff Sanderson.

With Jason Arnott and Josef Vasicek out of the lineup for Nashville, expect rookie Alexander Radulov to finally get some decent ice time. Radulov’s been up and down between the Preds and the AHL, but he’ll probably stick around for a bit.

Does your fantasy league count +/- for points? Brian Campbell has been putting up points and has a great +/- for (who else?) Buffalo’s blueline.

Mark Bell may not be having the season most fantasy owners wanted him to have, but he’s sure not shying away from any leagues that count PIMs. Demoted to the third line, Bell leads the Sharks with 32 PIMs.

Bell’s not the only high-priced forward experiencing a season from hell. Brendan Morrisson’s only got 10 points this season. So far, the Canucks haven’t been able to count on him for any secondary scoring behind the Sedins — hence the Canucks recent slide below .500.

Rookie Watch: Remember Phil Kessell? The American phenom was supposed to compete for the Calder trophy. Instead, he sits well out of the top 10 in rookie scoring. Hey, Eric Staal and Joe Thornton had crappy rookie years too.

Alexander Ovechkin and Henrik Zetterberg are battling their own cold streaks right now. The two young guns have a combined one point in the past week.

The Bruins are finally getting their money’s worth out of Marc Savard. After a slow start, Savard has surged to a better than point-per-game pace, taking Glen Murray with him. On the other end of the Bruins’ spectrum, Marco Sturm’s off to a horrible start.

The Eric Lindros experiment isn’t going well in Dallas. Despite the Stars’ good start, Lindros has only mustered five goals in 21 games. He has, however, put up an impressive amount of PIMs.

How are the Red Wings so good? Statistically, their team is awful. Henrik Zetterberg and Pavel Datsyuk have combined for just nine goals between them this season.

By Mike Chen
This entry was posted on Friday, November 24th, 2006 at 4:57 pm and is filed under HOCKEY, Ice Chips, Mike Chen. You can follow any responses to this entry through the RSS 2.0 feed. You can skip to the end and leave a response. Pinging is currently not allowed.