How Many Zeroes for Zaun? 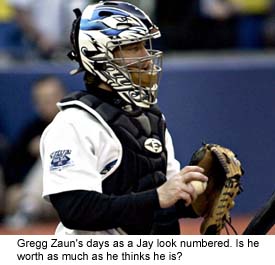 Gregg Zaun’s time in Toronto may be nearing an end with the Jays informally setting a deadline for him to accept their offer or move along.

That’s fair. Toronto needs to figure out what its catching situation will be in 2007, especially now that the Jays are getting more serious in talks with a younger, but probably more expensive Rod Barajas.

Last year the Jays brought in Bengie Molina, and his presence reduced Zaun’s PT to the lowest in three seasons in Toronto. Molina, also a free agent, will not be back, but that doesn’t automatically mean Zaun will be.

It’s believed that the Toronto wants to settle this Zaun situation one way or the other by the opening week of December when the Winter Meetings kick into gear and teams tend to start spending money more freely.

So where will the 35-year-old backstop wind up and how much is he worth, both in terms of financial clout and fantasy value?

Let’s take a closer look at this situation.

Zaun, acting as his own agent, understands that at his age, this is his last chance for some financial security. In fact, as a player who’s been a backup almost his entire career, working on year-to-year contracts, this really is the only opportunity Zaun has had to cash in with a multi-year deal.

He’s finally left his personal troubles behind and developed into somewhat of a decent-hitting catcher with the Jays, so Zaun needs to weigh his decision very carefully this offseason.

Originally, Zaun cited Damian Miller, who two years ago, at the age of 35, signed a multi-year deal with the Brewers, as the financial precedent he aimed to follow. Since then, the Cubs signed back-up catcher Henry Blanco, another 35-year-old, to a two-year, $5.25-million deal.

So if an aging backstop who will only play once or twice a week can command a multi-year deal worth that kind of money, it stands to reason that Zaun, capable of playing as many as 125 games, could get significantly more, doesn’t it?

The Jays don’t necessarily see it that way. No numbers have been made public, but Ricciardi admits that a two-year deal in the range of $6 million sounds about right for Zaun. Zaun, for his part, says he received an offer from Toronto that was only “a hair above” what Blanco got.

Obviously, he wants more. And Toronto is essentially ready to tell him if he has better offers out there, then go ahead and take them.

Zaun says three teams have offered him an everyday gig, and one of them is even interested in having him play a day or two at first base every week. Kansas City is one of the suitors, he says, but that’s the only confirmed one. Baltimore is also believed to be interested in him, but obviously that would be in a back-up capacity to Ramon Hernandez.

There are some big-money teams seeking better backups as well. Reportedly, the Yankees, Boston and the Dodgers could all use a more steady back-up man behind the plate, and none of those clubs have an aversion to opening their wallets.

The biggest concern I have is his ability to handle such a large workload. As mentioned above, Zaun was career backup before arriving in Toronto, never having received even 300 at-bats in any one season. If you look at the past three seasons, in each year he suffered a tremendous second-half letdown.

Now this isn’t especially unique among catchers, who do suffer offensively as the season progresses given the pounding they take, but Zaun’s dropoff this season was particularly bad. After batting .316 with a 921 OPS before the All-Star game, he stumbed to a .234 mark with a 740 OPS afterwards.

The fact that he experienced this significant a decline in a season in which he only had 290 at-bats is very worrisome.

Zaun’s productivity slipped slightly last year, but that’s understandable given that he hit mostly seventh in 2006 after seeing more action as the sixth-place hitter in 2005.

Another concern over the past couple of seasons — but especially last year — is the trend of Zaun hitting lefties far better than righties. It’s not as if he sucked against righties last season (.251, which was actually an improvement over his mark in 2005), but his overall numbers were much stronger because he absolutely molested southpaws (.373). That’s not going to happen again, so expect a corresponding reduction in Zaun’s overall numbers.

And if he leaves Toronto — home to one of the better hitter’s parks in the majors — wouldn’t Zaun’s offensive numbers suffer?

Looking at those figures, what’s Zaun waiting for? He should get the hell out of Hogtown which, strangely, is depreciating his potential, at least in 2006 (in ’05, he was better at home).

Arbitration-eligible Jason Phillips is currently pencilled in as the backup, but I suppose if the Jays really wanted Zaun back and they do come to terms with Barajas as the new starter, Phillips could be non-tendered.

From the sounds of it, Toronto would prefer to move on without Zaun, leaving him to find work with one of those three teams he says want him to be their starter.

When assessing his fantasy use come draft day, many will point to Zaun’s 825 OPS and 12 homers in 2006 and assign far more value to him than he may deserve — especially if he does get an everyday gig. Asking Zaun to repeat an OPS that high over the course of, say, 400 at-bats, would be very foolish indeed. He’d be most productive playing against all left-handers and getting perhaps two other starts per week.

Unfortunately, I doubt that situation currently exists for Zaun.

By RotoRob
This entry was posted on Friday, November 24th, 2006 at 12:54 pm and is filed under RotoRob. You can follow any responses to this entry through the RSS 2.0 feed. You can leave a response, or trackback from your own site.