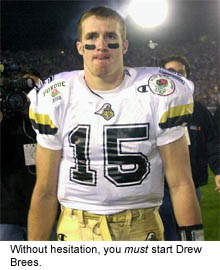 New Orleans at Atlanta – When these two clubs met earlier in the year, the Saints not only won, but they dominated the Falcons in a 23-3 romp. Of course, it was the first game back in the Super Dome, which had emotions running higher than normal. Still, start Drew Brees and Joe Horn without hesitation. Marques Colston was injured last week and it was originally called a high ankle sprain. For whatever reason, the description was changed to just an ankle sprain, and now he’s listed as day-to-day. Monitor his status as game day approaches. If he can’t go, Devery Henderson would be a fine sneaky start.

The Falcons are all about Mike Vick. The polarizing fantasy figure has done better at home this season, so he’s something of a sneaky start. Still, only use him as a very weak option. In the earlier meeting, Warrick Dunn struggled, and I don’t expect that to change this week. Keep the back on your bench. Of course you’ll start Alge Crumpler, but I also think Michael Jenkins is a good third wide out or flex start.

Pittsburgh at Baltimore – This might be one of the crazier games on Sunday. For some reason, the Steelers keep finding ways to make their Sundays interesting. I’m going to go out on a limb and say Ben Roethlisberger is a sneaky start. The Ravens have given up a ton of passing yards lately, and Roethlisberger will capitalize. Start Hines Ward and even Santonio Holmes makes for an interesting flex play. Willie Parker should come back down to Earth, but he’s still a solid second back.

The Ravens are suddenly all about the pass. Steve McNair probably isn’t worth a start, but Mark Clayton definitely is. The second-year wide out has over 70 receiving yards in four of his last five games. (He will be a hot commodity next year, so grab him now if you can, dynasty leaguers!) Jamal Lewis scored three times last week and might cross the stripe again this week. He’s still nothing more than a flex start, though.

San Francisco at St. Louis – Start ’em if you got ’em. I absolutely adore NFC West football, and these are the games to love. Frank Gore is an obvious start and Alex Smith is a sneaky one. Antonio Bryant would be a good start, except he just got in trouble with the law. As long as he plays, he’s a sneaky option as well. As for the Rams, Marc Bulger, Steven Jackson and Torry Holt are starts. Even Isaac Bruce is a marginal third wide out. Drinks all around!

Oakland at San Diego – Well then. I feel like I don’t really need to say much about this one. Philip Rivers is a surprising sit for me, since Oakland’s pass defense is actually very good. Other than that, look at this cute little baby! I don’t think he’s laughing at the noises, I think he’s watching the Oakland offense. (By the way, men. Don’t show this clip to your wives/girlfriends. It will make them demand a baby. In fact, it kind of makes me want one. Uhhh…I mean…to teach football to. Yes.)

Chicago at New England – This should be one of those low-scoring affairs, assuming the defenses show up. Rex Grossman is a low-end starter, as is Muhsin Muhammad. Thomas Jones is a surprising sit against the Patriots’ second-ranked run defense. Unfortunately for the Patriots, the Bears don’t make life easy for quarterbacks and running backs. And that’s all New England can boast. Laurence Maroney is a flex start, but I wouldn’t consider anyone else from the home team.

N.Y. Giants at Tennessee – I’m not playing around anymore, Eli Manning. You are supposed to take the next step. You’re a Manning. The NFL mandates that you take the next step now! Despite the fact that it’s the Titans, little Manning has shown no indication that he’s a safe fantasy start. Instead, Tiki Barber will get most of the touches. Plaxico Burress and Jeremy Shockey should do just enough to make fantasy owners content, but not enough to get Eli decent statistics.

Lost in the Donovan McNabb injury hysteria was the fact that the Titans are sort of coming around. Vince Young hasn’t been lights out, but he’s played well. Travis Henry, on the other hand, has been lights out. In fact, he’s taking light bulbs and smashing them up (but hopefully not the flourescent kind that give off poisonous gas). The former Bill has four 100-yard games this season, which hadn’t happened since 2003 (when it took him until Week 14 to reach the mark). He’s a bit of a sneaky start again this week.

Philadelphia at Indianapolis – Poor NBC. Flex scheduling seemed so perfect. Now it has to deal with Jeff Garcia (or A.J. Feely, depending on which guy Andy Reid hates more) vs. Peyton Manning. And to top it all off, the Colts aren’t even undefeated anymore. Oh well, let’s relive happier days, Donovan! And Freddie, why did you have to leave? Don’t you two realize that you need each other!? Err. Start Brian Westbrook, since he’s the only thing working right now. I don’t trust any of the wide out options anymore. Finally, you don’t need me to tell you what to do with your Colts.

Green Bay at Seattle – Brett Favre has started something like 800 consecutive games and then Aaron Rodgers comes in, makes 12 passes, and is out for the season. If that’s not an omen, I don’t know what is. Favre still might play, which is good news for Donald Driver. If Favre isn’t under center, there isn’t a Packer that I’d play in this one. If he is, then start Driver as usual. The Seahawks are in just the opposite boat. Matt Hasselbeck is returning, and is a must-start this week. It’s a good week for Seahawks, so go with Shaun Alexander, Darrell Jackson and Deion Branch as well.

Have a safe and happy Thanksgiving.*

* Thanksgiving is not currently available in Canada.

By Andy Goldstein
This entry was posted on Wednesday, November 22nd, 2006 at 12:59 pm and is filed under Andy Goldstein, Gridiron Goldstein. You can follow any responses to this entry through the RSS 2.0 feed. You can leave a response, or trackback from your own site.