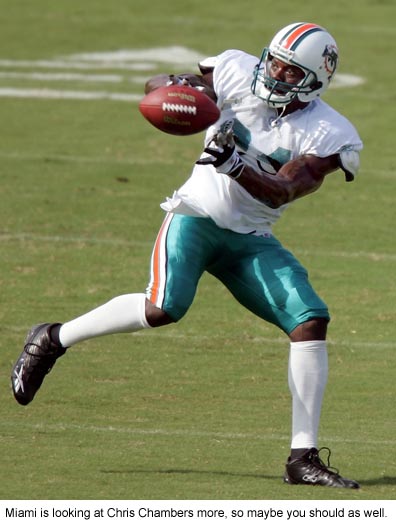 Miami at Detroit – Let me start off by saying that I hope everyone has a wonderful Thanksgiving this Thursday! Of course, what would Turkey-Day be without some great football action!? Err…Football action! Err…Football. I guess. Oh well, there actually could be some fantasy factors in this one. Chris Chambers has seen a drastic uptick in looks recently, and is something of a sneaky start against a shoddy Lions’ pass defense. And yes, it’s very sad that a pre-season top 10 wide out is now a sneaky start against the Lions.

Detroit will also put up some points, which means Roy Williams is a definite start. Even Jon Kitna is a deep sleeper despite his recent struggles. Unfortunately, Kevin Jones’ injury status is still unknown, so keep your eyes on the injury reports. If Jones regains health quickly, he’d be a good start against the Dolphins, but I’m not holding my breath with the quick turnaround.

Tampa Bay at Dallas – Joey Galloway and Carnell Williams had productive days last week, but there’s a difference between the Dallas and Washington defenses. Namely, the Cowboys aren’t terrible. I would leave all Bucs sidelined as you partake in the cranberry sauce. Side note: Cranberry sauce is my absolute favourite part of Thanksgiving. Maybe I’m the only one, but I only have it during the Holiday. I feel like if I have cranberry sauce in August, I just cheapen the whole experience. Is anyone with me here?

Anyway, don’t lose faith with Tony Romo because of the Colts’ game. Once he got accustomed to the pace, he played well. I expect 250 yards and two touchdowns from him in this one. Once again the running back by committee that Bill Parcells is going with turned Julius Jones into a neutered running back. I see no reason to expect anything to change here. Jones is, sadly, back to being a flex player.

Denver at Kansas City – It’s certainly comforting to a fantasy football vet like myself that no matter how much the NFL changes, Mike Shanahan will continuously be a source of frustration for fantasy football owners. Mike Bell!? Tatum Bell!?!? Damien Nash!??!!? I’m still fearful Terrell Davis suits up again. I’m not even going to offer a guess here. Put up two sheets of paper, one with ‘Mike’ written on it and one with ‘Tatum’ written on it. Blindfold yourself and then spin around in circles. After 15 seconds, steady yourself as best you can and then throw a dart. Whichever name it ends up closest to is who you go with.***

Not to pat myself on the back or anything, but I absolutely nailed the Trent Green situation last week. Here’s what I wrote:

Trent Green will be starting for the Chiefs, but I’d hold off on starting him just yet. The combination of rust and a good Oakland pass defense makes me think the calls for Damon Huard will intensify by Sunday evening.

Yes! I’m awesome! Uhh, ahem. Anyway, he is still not a good start thanks to Tony Gonzalez being injured. With what LaDainian Tomlinson has done for San Diego, Larry Johnson’s amazing season is being somewhat swept under the rug. Johnson has six 100-yard rushing games so far and at least one touchdown in his last eight contests. Both of those figures exceed Tomlinson’s.

Arizona at Minnesota – Let’s give it up to the Arizona Cardinals. Not only did they win a game last week, but their offense wasn’t a total train wreck either. Way to go! Unfortunately, the Vikings’ defense is not known for being worse than that of the Lions’, so don’t get carried away with optimism. Don’t play Edgerrin James unless you want to lose. Barring a cheap touchdown, he won’t be a fantasy factor. Only Anquan Boldin and Larry Fitzgerald remain legitimate fantasy options.

The Vikings, meanwhile, remain a one-dimensional offense. It’s all about getting Chester Taylor as many carries as possible. He’s a wonderful start in this game, but that’s not what I want to talk about. After scoring his first touchdown, Taylor mimicked Tomlinson’s touchdown celebration. Whether this was done out of respect or not, who is Taylor to be mimicking LT? And I like Taylor, but it struck me as an odd occurrence.

Carolina at Washington – This game is all about injuries and backups. Steve Smith and DeShaun Foster were both banged up in last week’s game. It appears as if Smith will be fine, so keep using him as you normally would. Foster is a different story. The Panthers haven’t said anything about Foster’s status, which makes life tough for Foster and DeAngelo Williams owners. Williams came in last week and showed why many think he was the most talented rookie back in the draft. At this point, it is a toss-up to me, which is awful if you need to make roster decisions by Thursday. It might be best to avoid the whole situation. For the record, Jake Delhomme is a sneaky start.

Cincinnati at Cleveland – Going into Week 10, Chad Johnson was a colossal bust. He hadn’t crossed 100 yards in any game and managed only two scores. Four-hundred and fifty yards, five touchdowns, and two weeks later, Johnson is at the top of the wide out rankings. Go figure. He is a good start as always, but consider leaving T.J Houshmandzadeh on the bench. The Browns’ pass defense is quite good and Houshmandzadeh has been struggling.

Cleveland played well last week, especially Braylon Edwards. The second-year wide out set career highs for receptions (seven) and yards (137) in a game. No team allows more yardage in the air than the Bengals, so Edwards and Kellen Winslow are both nice starts. Even Charlie Frye could be worth a couple touchdowns this week.

Houston at N.Y. Jets – Somehow Andre Johnson keeps doing just enough to stay relevant. The Jets’ defense keeps improving, so it shouldn’t be a barn burner on Sunday, but Johnson is a safe wide out start these days. Other than that, Owen Daniels is a very deep tight end option. And no, I don’t trust any of the backs just yet. On the Jets’ side, you can get away with starting Laveranues Coles, but anyone beyond that and you might as well start planning for 2009.

Jacksonville at Buffalo – Obviously Fred Taylor is having a serviceable season and is a good second option this weekend. The more interesting Jaguars’ back has to be Maurice Jones-Drew. The rookie hasn’t had a week without at least 85 total yards or a touchdown since the second game of the season. Is he winning leagues by himself? Of course not. But he has been as good a flex player as anyone this season. Jones-Drew is a start if you have room. Unfortunately, the youth in the wide out group has contributed to the Jaguars having a very inconsistent passing game.

Lee Evans had a game for the ages last week. In fact, Evans’ two touchdowns of over 80 yards in one quarter is an NFL record. He remains a fantasy start this weekend (duh). Just don’t be surprised if he gets even more attention from the Jacksonville secondary. Anthony Thomas, meanwhile, struggled mightily against the Texans. Now he’s facing a Jaguars’ run defense that allows only 96 total rushing yards per game. Keep the A-Train on your sideline.

***RotoRob vehemently recommends that no one should try this (without adult supervision). Please leave all sharp objects out of fantasy football.

By Andy Goldstein
This entry was posted on Tuesday, November 21st, 2006 at 11:30 pm and is filed under Andy Goldstein, Gridiron Goldstein. You can follow any responses to this entry through the RSS 2.0 feed. You can skip to the end and leave a response. Pinging is currently not allowed.