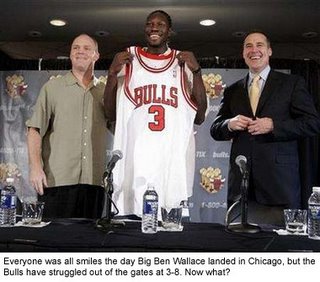 Hey! Weren’t the Bulls supposed to be all that this year? Wasn’t everyone and his brother picking them to be a contender in the East? Well, they’re 3-8, so what’s the deal? We find out what’s going on in the Windy City in this week’s Position Battles.

We also take a look at the Warriors’ PG situation with B Diddy out. Who’s manning the point in the Golden State?

There are plenty of other fantasy basketball skirmishes to catch up on and it’s all in Position Battles.

By RotoRob
This entry was posted on Wednesday, November 22nd, 2006 at 3:43 pm and is filed under Position Battles, RotoRob. You can follow any responses to this entry through the RSS 2.0 feed. You can leave a response, or trackback from your own site.