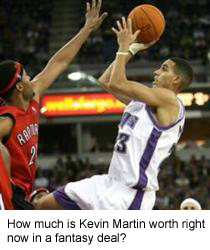 We’re back with another reach into the old mailbag to answer your fantasy sports conundrums.

Let’s start of this week with a letter from Brian, the king of big basketball deals.

What do you think of this trade? I’m trying to trade Kevin Martin, Leandro Barbosa and Ben Wallace for Ray Allen and Elton Brand. I could also give up Luke Ridnour instead of one of those guys. What do you think?

This isn’t a bad deal, depending on who you have to replace Big Ben, who looks inconsistent right now but is the man on defense, obviously.

Martin’s value as it its highest, so it’s a good time to move him. He looks like a scoring machine and is currently one of the top fantasy hoops dudes around.

Dealing Barbosa high and buying low on Brand is smart. Barbosa is really distributing well, but he’s going to get a bit less PT now that Raja Bell is back and Jalen Rose is also a factor there. Barbosa will retain value, but can’t keep this pace up.

Brand is such a dominant post player that the numbers will improve. He’s starting to look a bit more like the All-Star that he is.

As for Allen, he’s a scoring machine and he even showed he can rebound on Saturday (of course, that was against an undersized Warrior team).

Not a bad move depending on your reserves.

***
Next up, we heard from Kevin, who’s dying to get the buzz on Bonzi.

Hi, I would like to know what’s going on with Bonzi Wells. Do you have any news on him? He only played for three games and hasn’t played since then.

He actually only played two and then Jeff Van Gundy decided Wells needed to be inactivated because he’s out of shape. Remember, he left the team during training camp for some kind of personal reason, so missed a good chunk of the preseason. I did find it interesting that they activated him for a couple of games before they realized he wasn’t in game shape. Didn’t they notice this in practice? Something weird is going on there.

The latest word is Wells needs about two or three more weeks of intensive training before he returns. Look for him to be back in the lineup in early December.

I still believe Bonzi will be the Rockets’ starting two-guard before long.

Seth is getting fed up with Eddy Curry and his lack of dominant rebounding numbers among other things.

Alright Rob, I am also looking to get rid of Eddy Curry as my back-up C (I also have Toothless Chandler). Curry is good in points and FG percentage, but his rebounds are right back to being a Curry-like five to six per game and he is killing me in FT percentage and turnovers. Possible FA replacements are Jeff Foster, Channing Frye and Erick Dampier. I’m not thrilled about any of the three, but I think Channing might be ready to blow up and Foster may move into the starting lineup soon (which would suck because I have Danny Granger). Dampier would be a solid 9-9 and 1.5 BPGg if he can get 30 minutes as a starter. What do you think? Am I jumping the gun with Curry?

I have never owned Curry, but I imagine it’s a frustrating experience. He seemed committed to rebounding more this year, and he is slightly better, but only because he’s playing more and it’s still not what we’d like to see obviously. And he’s actually scoring a bit more this year too, which is always nice. If only he were in slightly better shape it might help his rebounding prowess, but he’s definitely an enigma. The one thing to remember is that Curry won’t be 24 until next month. He’s still pretty young. Does that mean he just has more time to get fatter? I don’t know.

Of the options you mentioned, I like Foster and Dampier better, but not Frye.

You’re right’the Pacers are looking to work Foster into the lineup more. And why not? He averages 18 rebounds per 48 minutes and they are desperate for help in that area. He has sleeper written all over him at this point if rebounds is what you need. With Al Harrington out, Foster got to start on Saturday, although it won’t be a permanent switch.

Frye seems to have solidified his job for the time being, but David Lee is definitely breathing down his back. Obviously Frye’s been a bust so far ‘ especially from the floor, but I really like him long-term, especially when he adds more strength. Chris Bosh also has some struggles early in his career as he was overpowered by bigger men. Once Frye can hold his position in the post, he’ll be a beast. But that may not be for a while.

Dampier exploded on Tuesday and is now the man in Dallas. He’s playing really well now and his FG percentage is off the charts. He’s even scored in double figures in three straight games, so he’s finding a scoring touch.

If you’re intent to upgrade from Curry, you’re safest bet is Dampier, although Foster brings the most upside if you’re willing to risk him getting the PT (which it sounds like he will).

Would you trade Wally Szczerbiak for AK-47?

I play in a 12-team head-to-head league which counts eight categories (no turnovers) and has daily moves so everyone on the roster plays. My team is stong in points, threes, percentages and assists and weak in blocks and rebounds.

On the surface, it seems like a good move, but I am worried about AK’s health. I already have Grant Hill, Richard Jefferson, Brad Miller and Larry Hughes all of whom are injured or likely to be that way at some point.

Well, Wally isn’t always Mr. Healthy either. He’s still finding his legs after off-season surgery and had an issue with his ass earlier this season.

Having said that, Wally World is looking significantly better than Kirilenko right now. AK-47 is one of those fantasy darlings, because he helps in every category, but right now, his FT shooting is looking really pathetic. He’s taken quite a tumble in this area. Sure, he’s the man in blocks and he gets quite a few assists for a big man, but the rebounding is not currently significant enough to offset Szczerbiak’s huge edge in FT shooting, 3-pointers and points. Especially with Al Jefferson out, Wally will continue to get plenty of touches in Boston.

And of course, Kirilenko is still out for another game at least.

I’d pass on this deal. You’re better off trying to peddle Wally for Josh Smith at this point. If that’s a possibility, I’d look into that.

By RotoRob
Tags: Kevin Martin
This entry was posted on Monday, November 20th, 2006 at 10:13 am and is filed under BASKETBALL, Dear RotoRob, RotoRob. You can follow any responses to this entry through the RSS 2.0 feed. Both comments and pings are currently closed.