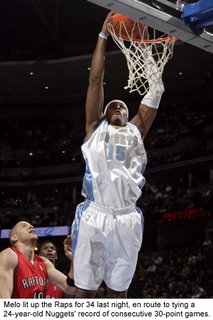 RotoRob has been remiss. It’s been a few days since I did a Raptors’ report as I’ve been completely swamped putting together next year’s Fantasy Baseball Guide among other things. But not to worry. I’ll make up for it today with an extensive report from last night’s loss in Denver.

You had to know going in that something was going to give here. The Nuggets were 0-2 at home and the Raptors were 0-4 on the road. Someone was going to break a goose egg. Unfortunately, it turned out to be Denver. And yes, the Raps didn’t arrive at their hotel in Denver until 4 a.m. Saturday morning and it’s never easy to play in the altitude of Denver, so that’s an easy excuse for the 117-109 setback.

But plenty of credit has to go to Carmelo Anthony, who has stepped up big time in the absence of Kenyon Martin, done for the year with another knee surgery. Coming on the heels of a 34-point point effort in a loss to Orlando Wednesday, Melo went crazy again last night with another 34-point game for his sixth straight 30+ effort.

That ties the Denver record and it was done with the man who held the mark watching from the bench. Raptors’ assistant coach Alex English was the first Nugget to turn the trick, doing it 24 years ago.

So despite an impressive offensive showing from Toronto, that’s five straight times the Raps have gone down at the hands of Denver.

By RotoRob
This entry was posted on Sunday, November 19th, 2006 at 2:20 pm and is filed under BASKETBALL, Courtside, RotoRob. You can follow any responses to this entry through the RSS 2.0 feed. You can skip to the end and leave a response. Pinging is currently not allowed.