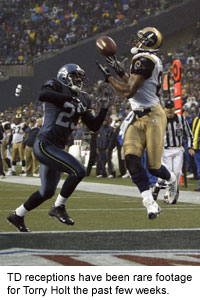 St. Louis at Carolina – What’s up with Torry Holt? After a five-game stretch with three 100-yard efforts and touchdowns in every game, he has had three consecutive games with fewer than 75 yards and no touchdowns. Of course this isn’t the time to bench Holt or Marc Bulger. Hopefully, they will work through their bad games. Unfortunately, the same can’t be said for Isaac Bruce, who is back to being just a spot-starter. In fact, Kevin Curtis has turned into the better fantasy player recently. Keep rolling with Steven Jackson despite the Orlando Pace injury. Jackson will continue to get his.

Other than Steve Smith, the Panthers are slim pickin’ from a fantasy standpoint (save for the defense of course.) Jake Delhomme has yet to toss more than two touchdowns in a game. DeShaun Foster, meanwhile, hasn’t had over 60 rushing yards since Week Five. Of course the Rams are as friendly a matchup as you’ll see, but I still don’t think that makes Delhomme or Foster a start. You can find better options this week.

Tennessee at Philadelphia – Gentlemen, start your Eagles. Donovan McNabb, Brian Westbrook and Dont’ Stallworth are safe starts, while L.J. Smith and Reggie Brown could both be sneaky options. I think one will score a touchdown. Sadly, the Titans probably won’t repeat last week’s offensive burst. Drew Bennett seemed to be back in game form, and is the only intriguing option this weekend. Use him at a flex spot if you’re desperate.

Washington at Tampa Bay – As is often the case towards the end of an NFL season, some teams are gearing up for the playoffs which brings up questions like ‘How long are the starters going to play?’ And then there are the teams on the other side of the spectrum. And while there’s no chance a player having a good season will be riding the bench during late-season games, some players are shut down because there’s no reason to risk further injury with all hope gone. Welcome to No Hope, Clinton Portis. Care to join us, Santana Moss? I hate to be the bearer of bad news, but any fantasy potential this game had went out the door with a broken hand and Jason Campbell.

Detroit at Arizona – Because I’m a glutton for punishment, I decided to type ‘Arizona Cardinals’ into YouTube’s search function. Between Dennis Green exploding (we’ve seen that enough, no link) and the Cardinals being destroyed by the Cowboys (even without seeing it, you can infer what that looks like, no link), there was this. Paint It Black, my favorite Stones’ song, live in Arizona (although someone needs to teach the dude filming how to hold a camera steady; I got a bit sea sick watching it, which is strange considering how far Arizona is from any large body of water). I don’t know what it has to do with Cardinals, but I’m okay with it, even if it doesn’t quite sound like it did back in the day.

Seattle at San Francisco – Matt Hasselbeck and Shaun Alexander are both question marks for this game. If Hasselbeck plays, I’d still look elsewhere. Quarterbacks often need some time to get back into game form after missing even a couple games. Alexander, on the other hand, should go right back into the starting lineup. First, if you lost Alexander, you’re probably struggling and need a boost. Second, the 49ers’ run defense hasn’t been great. Third, it’s a top three draft pick, and what else are you going to do? Darrell Jackson and Deion Branch, meanwhile, would both be decent starts with either quarterback.

Frank Gore has been able to get back to practice, which makes him a start this week. Let’s be honest, can you bench this? (Sorry for the crappy quality, but the NFL is mean.) Anyway, I also like Antonio Bryant in this one. He could be in for a touchdown. Finally, it looks as though Vernon Davis has a chance to get back into the lineup. This means little for most fantasy teams, but if you need a very long shot, why not?

Indianapolis at Dallas – For some reason, this is a lot of people’s upset pick of the week. For that to happen, the Cowboys will have to score 35 points, which I’m totally okay with. You know to start Peyton Manning, Reggie Wayne and Marvin Harrison. Despite the very stout Dallas run defense, I think Joseph Addai will score for the third straight game. Unfortunately, it’s a risky pick, since sans a score, it won’t be a start-worthy performance.

Annoyingly, the Cowboys have gone back to being a running back by committee. That makes me a sad panda. Luckily, both Julius Jones and Marion Barber should make an impact this week against the worst run defense in the history of the world (well, close to it at least). Tony Romo is a weak starter and Terrell Owens will find a way to score a touchdown.

San Diego at Denver – It’s not every week you break a record held by Jim Brown. Unless you are LaDainian Tomlinson, of course. Late last week, he scored his 15th touchdown in the last five games, which broke Browns’ record of 14 in five games. Now the real LT is two away from reaching 100 lifetime rushing touchdowns faster than anyone, a record now held by Emmitt Smith and, you guessed it, Brown.

The Broncos don’t have anyone breaking any records at the moment, (any positive records, at least) but Javon Walker has put together a nice season and he could find a way to score again this week. Other than that, I’d take a pass on this division rivalry which is often a low-scoring affair.

N.Y. Giants at Jacksonville – Talking about defensive struggles, I am absolutely disgusted by this matchup. It really makes me want to track down whoever is in charge of getting games for ESPN and politely explain to them that 7-6 games aren’t fun, and we’re not amused. Tiki Barber might get some yardage. Plaxico Burress is a touchdown threat. Fred Taylor will get yards and is a touchdown threat. Other than that, might I suggest finding some non-Newtonian liquid to travel across? (I really have no idea what is going on in that video.) Anyway, it has to be more fun than watching this game.

As always, email me at AndyG@mvpff.com with your fantasy football questions.

By Andy Goldstein
This entry was posted on Saturday, November 18th, 2006 at 3:42 am and is filed under Andy Goldstein, Gridiron Goldstein. You can follow any responses to this entry through the RSS 2.0 feed. You can skip to the end and leave a response. Pinging is currently not allowed.