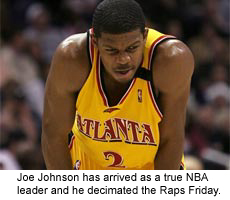 The Atlanta Hawks soared into town last night boasting the best record in the East. And they left with that mark intact after putting on a dominating offensive show in a 111-102 victory over the Toronto Raptors.

The Hawks are not only the youngest team in the NBA, but most of their key parts are veritable babes in the woods. What a tremendous core of young talent this club has amassed: Joe Johnson (25), Josh Childress (23), Shelden Williams (23), Zaza Pachulia (22), Josh Smith (20) and Marvin Williams (20). Much of the supporting cast is also young, including Salim Stoudamire (24) and Cedric Bozeman (23).

With the win, the Hawks moved to three games over .500 for the first time in seven and a half years. Hell, Smith was barely in middle school the last time Atlanta had a winning team. Last season, the Hawks got off to an 0-9 start. These clearly aren’t your father’s Hawks. From the looks of it, they’re not even your older brother’s Hawks.

While I find it difficult to imagine this team will maintain its pace, or even make the playoffs for that matter (especially when other teams start taking the Hawks seriously), stranger things have happened. The team is actually starting to believe they’ll make the playoffs, and that’s often half the battle. But regardless of whether Atlanta is playoff bound or capable of snapping its streak of seven straight losing seasons this year, it’s a team on the rise and one that’s capable of giving anyone problems with its athleticism and skill.

As for the Raptors, the loss drops them back to a losing record of 2-3. Coach Sam Mitchell is considering lineup changes because in each of the five games so far, Toronto has gotten off to a slow start. Something’s got to give there.

Things don’t get any easier. The team now sets out on a five-game Western road trip starting Sunday in Sacramento and 17 of the Raptors’ next 23 games are away from the ACC. Thanks, schedule makers. The team better learn how to win on the road — pronto.

By RotoRob
Tags: Toronto Raptors
This entry was posted on Saturday, November 11th, 2006 at 11:42 am and is filed under Courtside, RotoRob. You can follow any responses to this entry through the RSS 2.0 feed. Both comments and pings are currently closed.