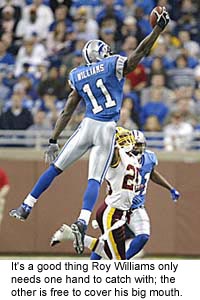 San Francisco at Detroit – Are we ready for a shootout in Detroit? The biggest beneficiary this week should be Frank Gore. He has been slowed by some tough defenses in his last three games, but has still managed to put up good yardage numbers. I expect not only 100 yards, but also a trip across the stripe for the first time since Week Two. Thanks to the Lions’ 27th-ranked pass defense, I also have a hunch Antonio Bryant will be worth a start, and he should score again.

In case you were keeping track, the Lions are 1-0 since Roy Williams said they’d finish the season with nine straight wins. Almost there! Anyways, Williams is having a fine season and is an obvious weekly start. Kevin Jones has also turned himself into a must start, especially against the 49ers. Finally, Jon Kitna and Mike Furrey are both sneaky starts.

Washington at Philadelphia – This is probably one of the more clear-cut games from a fantasy perspective. With Santana Moss ailing, the only safe option for Washington will be Clinton Portis. Even if Moss plays, Portis will be the featured offensive weapon. For the Eagles, it’s the standard fare: Donovan McNabb, Brian Westbrook, Reggie Brown, Dont’ Stallworth and L.J. Smith. Ho-hum.

Denver at Oakland – Start Javon Walker. Mike Bell might be something of a sneaky start after what last week might have been the saddest performance by a Mike Shanahan-coached Denver running back ever. He should improve upon his 17 carries for 28 yards. Start Walker. And start Walker. What was that? Oakland? What do I think about the Raiders this week? This! Uh yeah, I’ll stick to bar shots, and leave the groin shots to the thugs in silver and black.

Dallas at Arizona – These former division opponents square off in what could actually be quite the fantasy bonanza. Tony Romo has worked himself up to being a legitimate fantasy starter, and I think he’ll have a good stat line this week against one of the more porous pass defenses in the league. It also helps to have Terrell Owens playing as well as he has in a while (aside from a drop here and there). Julius Jones and Jason Witten round out the Dallas starts this week. Leave Terry Glenn on the pine; he’s the fourth option in the offense and is a bit banged up.

Larry Fitzgerald is coming back for the Cardinals, and this stands to be good news for the entire Arizona offense. Anquan Boldin, in particular, should benefit from having a legitimate threat on the other side of the field. While Matt Leinart isn’t a fantasy start, he could toss a couple touchdowns this weekend. The good news does not extend to Edgerrin James, at least not against the Cowboys, as they are one of the top run defenses in the league.

New Orleans at Pittsburgh – At the start of the season if I told you that one of these teams would be 6-2 while the other would be 2-6, we all know which you would assume was which. Isn’t football great? (Sorry Steelers’ fans.) Anyways, the Saints are going to score some points here. I think they’ll do this in the passing game, so Drew Brees, Marques Colston and Joe Horn are all starts. Deuce McAllister is a sit, as the Steelers just don’t allow ground yardage often.

I really don’t know what to make of Ben Roethlisberger’s game from last week, and on top of that, the Saints’ pass defense is something of an enigma. They’ve allowed the fifth-fewest yards, but the fourth-most touchdowns. I’d sit Roethlisberger unless you have no other option. Willie Parker will run well, and Hines Ward could be the recipient of at least one touchdown.

St. Louis at Seattle – I am so excited that there’s an NFC West game this week. They are, by far, the most entertaining, especially for fantasy owners. Torry Holt hasn’t topped 50 yards either of the last two weeks, but I expect him to rebound here. Marc Bulger will have Holt and Issac Bruce open much of the day. Finally, Stephen Jackson is enjoying a breakout season himself. He is currently fourth in yards from scrimmage.

The Seahawks will again be without Shaun Alexander, but for the first time this season, I am going to call Maurice Morris a sneaky start. This isn’t because I think he’s really any good, but the Rams are allowing a pathetic five yards per carry, so Morris should be good for four yards each try, right? Darrell Jackson and Deion Branch should both be starters, and Jeremy Stevens could be a sneaky pick up.

Chicago at N.Y. Giants – Will the real Rex Grossman please stand? Alternating between three touchdowns and three interceptions each week is killing fantasy owners. As I’ve said before, I think Grossman will struggle down the stretch, and I don’t like his prospects here. Thomas Jones might find the endzone, but I think it will be a low-scoring game all around.

Obviously, you’ll start Eli Manning and Tiki Barber. Plaxico Burress is slightly banged up, and he made some comments about the Bears which will certainly get himself more attention. Still, top wide outs do well against Chicago, and I don’t think Burress is any different. As long as he’s healthy, I’d play him. Keep rolling with Jeremy Shockey, despite his inconsistency, since there’s always a chance he scores a touchdown.

Tampa Bay at Carolina – Wow, I didn’t think ESPN could do much worse than Seneca Wallace vs. Andrew Walter, but apparently it’s trying very hard. Good luck to Tony Kornheiser to find a fantasy angle in this one. I guess there’s Steve Smith and Jake Delhomme. Only the former is a safe start. Delhomme might get a couple touchdowns, but the yardage will be limited. Other than that, maybe this one will have an eye-poke or something to make it more entertaining? Otherwise, Tyler Brayton will have to be ESPN’s celebrity booth interview.

By Andy Goldstein
Tags: Roy Williams
This entry was posted on Saturday, November 11th, 2006 at 11:51 am and is filed under Andy Goldstein, FOOTBALL, Gridiron Goldstein. You can follow any responses to this entry through the RSS 2.0 feed. Both comments and pings are currently closed.