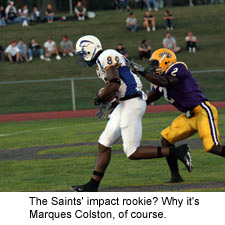 New Orleans at Tampa Bay – It was a good thing the Saints drafted a game-changing rookie who has been able to acclimate himself to the NFL style immediately. I am, of course, talking about Marques Colston. He’s been one of the best wide outs in the NFL, and if you can use him as a tight end (you know who you are), all the better. Drew Brees is a start and Deuce McAllister should produce with Reggie Bush ailing. Even Joe Horn has picked it up as of late.

After three straight weeks where it seemed as if Carnell Williams was regaining his early rookie form, the Tampa running back struggled with only 54 total yards in Week Eight. Sadly, if Williams isn’t a factor, then the Bucs turn into one of those fantasy wasteland teams. No one wants to see that.

Tennessee at Jacksonville – Just when I was ready to accept Travis Henry back into my life, the Titans pull the ol’ ‘Let’s Give the Rook Meaningful Carries’ joke. No one from Tennessee will be in position to be a fantasy factor Sunday. The Jaguars will most likely run, run, and then run some more. Fred Taylor is a start and Maurice Jones-Drew is again a flex option. Continue to avoid the Jacksonville pass game as Byron Leftwich sits out again.

Minnesota at San Francisco – You can tell how the Vikings did in a game by how many carries Chester Taylor got. In wins, Taylor has never seen fewer than 24 carries. In losses, Taylor hasn’t gotten over 20. I’m going to go out on a limb and say the Vikings take it to the 49ers, which means Taylor will get his carries. Oh, and no, Brooks Bollinger, stay away from me!

Yes, the 49ers got housed by the Bears last weekend, but their offense did put together some interesting stats. Frank Gore ran for more than 100 yards and Antonio Bryant chipped in with a touchdown. Bryant is a good start, but Gore is only a weak second option. The Vikings’ run defense is ranked second. But don’t fret, Gore owners — after this week, the 49ers’ schedule gets very easy and our top sleeper option will pick it up.

Cleveland at San Diego – With Shawne Merriman serving his suspension and Shaun Phillips questionable, it will be interesting to see if the Browns’ offense can capitalize. Because of this, Reuben Droughns is certainly a better play than he would have been otherwise. He had a great performance last week, but can you trust him again? I think he might just barely be a second starter, so if you’re strapped at the running back spot, give him a tentative go. Kellen Winslow should have another good game, but leave Braylon Edwards on your bench.

The Chargers are rolling right along. LaDainian Tomlinson is having another Pro Bowl campaign. How many more years of this do you have to see before you consider him for your ‘top five running backs of all time’ list? Anyway, Antonio Gates and Philip Rivers are starts, but don’t bite on any of the wide outs. They just aren’t making plays.

Denver at Pittsburgh – Okay Mr. Shenanigans, Tatum Bell or Mike Bell? I suppose with Tatum questionable, it should be Mike getting the majority of the carries. But, well, it’s Denver, and for all we know, Cecil Sapp will tote the ball 20 times. Let’s hope not. I guess Mike is a second starter, but against the Steelers, temper expectations. In the passing game, Javon Walker continues to be a bright spot. Don’t bench him now.

If I were Ben Roethlisberger, I think I’d take a vacation. Somewhere nice, somewhere serene. It seems as though he’ll stick with the chaotic football stuff, however. That’s really too bad. I think the situation is too uncertain for you to rely on Roethlisberger. He’s thrown for good yardage lately, but the interceptions and lack of touchdowns are too much to overcome. I’d also leave Willie Parker on the bench if you can afford to as the Broncos have allowed no rushing touchdowns this season. Hines Ward is the only definite start for the ‘Burgh.

Indianapolis at New England – So this is the game that everyone is waiting for. It’s the big rivalry game. Peyton Manning vs. Tom Brady. Uhh, Brady has only lost to Manning once. But never mind that. This is a back-and-forth rivalry because…umm…because the NFL (and ESPN) says so, dammit! Anyway, both of these guys are obvious fantasy starts. I will, however, use my crystal ball to tell you that the Patriots will focus much more on their running game. Expect Corey Dillon and Laurence Maroney to both be average second fantasy options or great flex starts. You know the Colts’ wide outs, but don’t buy into Doug Gabriel or Reche Caldwell too much. Brady still likes to spread the ball around, and when he doesn’t pass 43 times, the wide outs won’t be nearly as successful.

Oakland at Seattle – Wow, another great Monday Night game. Where would we be without ESPN making us watch Andrew Walters battle Seneca Wallace? Stuck watching Deal or No Deal? Ugh. Consider Randy Moss a weak second or strong third wide out. Darrell Jackson is banged up, but pretty much Wallace’s best option. That will count for something.

P.S – Yes, YouTube took down all of the Season Two Laguna Beach clips. And yes, I’m distraught about it.

By Andy Goldstein
Tags: Marques Colston
This entry was posted on Saturday, November 4th, 2006 at 11:46 am and is filed under Andy Goldstein, FOOTBALL, Gridiron Goldstein. You can follow any responses to this entry through the RSS 2.0 feed. Both comments and pings are currently closed.