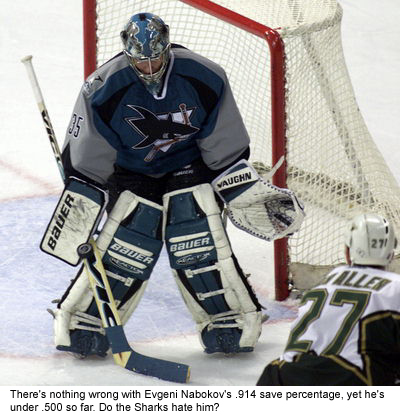 The San Jose Sharks must not like Evgeni Nabokov that much. Even though Nabokov has played well (his save percentage is great), his record’s not that good. Having poor goal support will do that — Vesa Toskala enjoys nearly twice the goals-for output than Nabokov.

The best scoring defensive tandem is up in Montreal right now. Sheldon Souray, who’s name is repeatedly mentioned in trade rumors, and Andrei Markov are both among the league leaders in points.

Staying up in Montreal, both David Aebischer and Cristobal Huet are splitting time to pretty good success so far this season. Will this keep up? Buffalo’s not splitting time between Ryan Miller and Martin Biron, and down in Anaheim, J-S Giguere has his starting position back. Of course, the Sharks are still alternating. What does that mean? Anything’s possible!

Superstars heading in different directions: since Jonathon Cheechoo’s first hat trick early in the season, he’s hardly done anything except put up a few assists. On the other hand, Martin St. Louis is smokin’ hot as the Tampa Bay Lightning are rounding into form.

Down in Florida, Todd Bertuzzi will sit on the shelf a little longer. He’s out up to two months with back surgery. Good thing Olli Jokinen is carrying the team right now.

Does your fantasy league count shots on goal? Marian Hossa put up 16 — yes, 10 plus six — in one game this week.

The New York Rangers continue to run hot and cold, and their goaltending is part of it. Kevin Weekes won two straight games against Pacific powerhouses San Jose and Anaheim. However, don’t expect him to take over the number one spot for an extended period of time.

Ted Nolan should win the Jack Adams trophy — not for motivating Alexei Yashin (who is living up to his big contract finally), but for actually getting some decent play out of enigmatic Viktor Kozlov. Kozlov’s last good season was way back when with the Florida Panthers on a line with Pavel Bure and Ray Whitney. Yes, it was that long ago.

Speaking of Whitney, he’s quietly had a great season. Eric Staal and Erik Cole are the big names, but Whitney’s up there with points so far this season.

There were rumblings in Colorado that Peter Budaj was going to get a run at number one goalie for a while. However, some solid performances by Jose Theodore seems to have locked him in as the starter…for now.

Injury report: Nashville’s Martin Erat has been skating with Paul Kariya and Jason Arnott all season. He’s just taken ill with some rib problems, but it’s nothing catastrophic, just keep an eye on it. Detroit’s Mathieu Schneider has missed a bunch of playing time with a groin problem.

Daniel Alfredsson is cold cold cold up in Ottawa. On the other end of the spectrum, ex-linemate Jason Spezza is burning up the ice.

You can’t stop the Buffalo Sabres, you can only hope to contain them. From Chris Drury to Maxim Afinogenov to Thomas Vanek to Jason Pominville, it seems like anyone who gets regular playing time in Buffalo puts up points, so it’s worth your time to see if any extra names are around.

The Blackhawks get a few days off to hopefully get healthy. Michael Handzus isn’t coming back, but Martin Havlat and Nikolai Khabibulin were targeted around early-mid November, so hopefully they can get the Hawks back on the winning track.

Which Rangers team will show up on Sunday against the Sabres? The one that rolled over against the Florida Panthers or the one that took out the Ducks and the Sharks?

The Dallas Stars go on a Western Canadian road trip. That means that the struggling Calgary Flames will have their hands full with the team from Big D.

The Wild get a good test of their true abilities with games against the Predators and the Sharks.

Three weeks ago, the Flyers and Islanders would have been an opportunity for Philly to get back on track. Now, the suddenly hot Islanders will be seeking an easy win against the Flyers.

By Mike Chen
This entry was posted on Friday, November 3rd, 2006 at 1:34 pm and is filed under HOCKEY, Ice Chips, Mike Chen. You can follow any responses to this entry through the RSS 2.0 feed. You can skip to the end and leave a response. Pinging is currently not allowed.