From the Sidelines: Going Collegiate 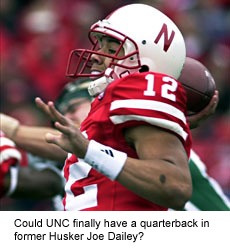 Every so often RotoRob will take in a college football game. It’s some seriously rare footage; not Halley’s Comet-esque, but damn close.

Yesterday, we watched our beloved Tar Heels put up a bit of a fight (more than we expected, anyways) against 11th-ranked Notre Dame, ultimately going down 45-26. Suffering through another UNC football game (1-8, 0-5 vs. ACC) made us thank our lucky stars that NCAA basketball starts this week.

Anyways, here’s a couple of nuggets from the game:

By RotoRob
This entry was posted on Sunday, November 5th, 2006 at 12:23 pm and is filed under From the Sidelines, RotoRob. You can follow any responses to this entry through the RSS 2.0 feed. You can leave a response, or trackback from your own site.