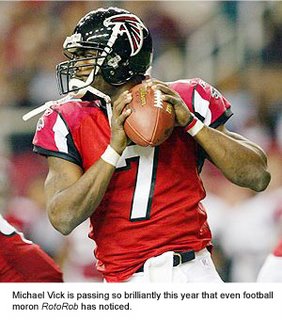 Atlanta at Detroit – As RotoRob pointed out earlier this week, Mike Vick is passing better than he ever has before. He has 523 passing yards, seven touchdowns and 95 rushing yards in his last two games. When people use the word ‘scary’ about Vick, the last two weeks are exactly what opponents fear. As long as the passing game is working, Michael Jenkins and Ashley Lelie are intriguing fantasy options. Both are sneaky starts against Detroit’s porous pass defense. Warrick Dunn, meanwhile, is harder to gauge. As long as Vick is passing for more than 250 yards, the run game will take a back seat. You can probably find better options.

Coming off the bye, the Lions are probably somewhat healthier than they have been in a while. Atlanta has trouble stopping the pass game itself, which makes Jon Kitna and Roy Williams good fantasy options. Kevin Jones, on the other hand, is nothing more than an average second fantasy option. The Falcons’ front four can stop running backs, so Jones will have to make up for it in the receiving game. Oh, and Williams thinks the Lions can finish the season with nine straight wins. I can’t add anything to that to make it any more comedic.

Cincinnati at Baltimore – In their last two games, the Ravens have allowed nearly 750 yards and five touchdowns through the air. Wasn’t this defense supposed to be, you know, good? Add in the fact that Carson Palmer has thrown more than 300 yards in three out of four games against Baltimore and there’s plenty of reason for optimism here. Chad Johnson and T.J. Houshmandzadeh are starts, and Chris Henry is actually a sleeper option. Rudi Johnson is also a start, but he needs to get more than 12 carries like he did last week. Other than Todd Heap, there’s not much to like while Steve McNair and the Baltimore offense is on the field.

Dallas at Washington – Listen up MTV. Don’t you want another reality TV show? You have the high school football one. That’s sort of boring, though. Why not take your cameras inside Dallas Cowboys football? The cast of characters would be genius. Terry Glenn is your ‘normal’ wide out. Bill Parcells, Drew Bledsoe, Terrell Owens and Tony Romo? That’s more exciting than Kristin, LC, and Jason any day of the week. Anyway, start Owens and Jason Witten. They’ll manhandle an outmatched Redskins’ secondary. I’ll call Romo a sneaky start, but Glenn should still be avoided. He’s been the odd man out. Oh, and by the way, Julius Jones has been one of the best running back sleepers this season. He’ll find open space with the air game getting all of the attention.

With Santana Moss ailing, the only Redskins to consider are Clinton Portis and Chris Cooley. Portis is also banged up, so consider him more of a second fantasy starter. Apparently Jason Campbell has been practicing with the Washington first-string offense. Dynasty leaguers should take note and give the youngster a look if you have a deep bench.

Green Bay at Buffalo – Brett Favre is back! He’s winning games and watch out, post-season play! Okay, maybe not, but he could be something of a sneaky start in this game. Buffalo doesn’t give up a ton of yards, but it has allowed plenty of passing touchdowns this season. I’m expecting Favre to toss another couple. Donald Driver is a start, and Greg Jennings would be if he were healthy. Keep your eye on that situation. Ahman Green has been running well, and that should continue in this game.

The Bills are coming off their bye, so expect J.P. Losman to be somewhat better than he has been recently. He’s still not a start (unless you participate in one of them fancy two-quarterback leagues), but I do think Lee Evans is. Willis McGahee is an interesting play. He’s 10th in the league in rushing yards, but only has one touchdown. Does he think he’s Tiki Barber or something? Thank you, thank you. I’m available for any function, just talk to my agent, RotoRob.

Houston at N.Y. Giants – How about that Owen Daniels, eh? Five receiving touchdowns is more than Antonio Gates, Tony Gonzalez, Jeremy Shockey and, well, every tight end other than Alge Crumpler and Todd Heap. That’s not bad. I guess Daniels should have been their first pick overall. Ahem. Anyway, it will be interesting to see how the second half of his season goes. Wali Lundy should remain on the bench, and you all know Andre Johnson is a stud.

As for the Giants, start ’em if you got ’em. Eli Manning, Barber and Plaxico Burress are all starts. If you are in a touchdown heavy league, you can get away with putting Brandon Jacobs in your lineup. Even Amani Toomer is a sneaky start. The only way the Giants will be stopped is if there are 40 mph wind gusts in New York again.

Kansas City at St. Louis – Yes! Now we’re talking. This contest should result in at least 75 points. Has anyone noticed that Damon Huard isn’t a bad quarterback? I know it’s hard to comprehend, but in four of his last five games, Huard has thrown either two touchdowns, over 250 yards, or both? Expect another ‘both’ game against the Rams. Larry Johnson has regained his top form, and shouldn’t be benched the rest of the season. Gonzalez has also found his game, but don’t consider anyone else in the passing game. The wide outs are too sporadic.

The Rams will also be a fantasy feast on Sunday. Marc Bulger, Steven Jackson, Torry Holt and Isaac Bruce are all starts. Even Kevin Curtis is becoming a sneaky start again. Mike Martz, we loved you, but we’re officially over you now. And stop calling us every weekend ‘just to talk.’ We’re not buying it!

Miami at Chicago – I bet you’re thinking ‘Man, the Dolphins against Chicago, there’s no way Andy even mentions a single player.’ I am full of surprises, however. Ronnie Brown is still a flex play this weekend. I also think either Randy McMichael or Chris Chambers will get a garbage time touchdown. On the other side of the ball, you can legitimately start six Bears this week. You know about Rex Grossman, Thomas Jones, Bernard Berrian and Desmond Clark. I also think Cedric Benson will get a garbage time touchdown and Muhsin Muhammad is still a flex player.

By Andy Goldstein
This entry was posted on Thursday, November 2nd, 2006 at 1:36 pm and is filed under Andy Goldstein, FOOTBALL, Gridiron Goldstein. You can follow any responses to this entry through the RSS 2.0 feed. You can skip to the end and leave a response. Pinging is currently not allowed.