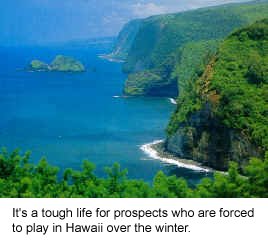 You just finished the grind of a minor league season and your organization has informed you that it wants you to play winter ball. In war-torn Venezuela? Blazing hot Arizona?

How about Hawaii, baby?

What a sweet gig.

The Hawaiian Winter Baseball League is back after a nine-year absence and the four-team circuit kicked off action a couple of weeks ago with an array of top prospects from around the world.

The Mariners have sent their first rounder from 2005, catcher Jeff Clement, to the Hawaii Baseball League, but he’s struggling at .174 through nine games with no extra-base hits for the Waikiki Beachboys.

Let’s face it, it can’t be easy to get motivated in such a ‘hang loose’ environment.

Prospects who are faring well include:

We’ll try to bring you periodic updates of fantasy-worthy names playing in Winter Leagues over the offseason. Until then, Aloha!

By RotoRob
This entry was posted on Wednesday, October 25th, 2006 at 7:29 pm and is filed under RotoRob. You can follow any responses to this entry through the RSS 2.0 feed. You can leave a response, or trackback from your own site.