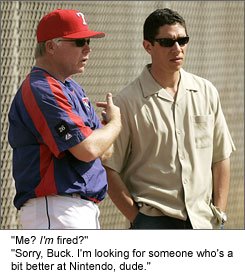 A couple of days ago, we looked at the San Francisco managerial search, clouded by the Barry Bonds’ situation.

Today, let’s turn our attention to the American League West, looking specifically at who is going to wind up in charge of the Texas Rangers.

We have already discussed the fact that whoever gets the gig, inherets a ton of promise, but now let’s review the candidates.

There are five men up for the job, but not one has experience as a major league manager, and I’ve got to wonder what the Rangers are thinking here. I mean, come on…their general manager is, what, like 17 years old? It wouldn’t hurt to bring someone in who’s got a little more experience. But perhaps Jon Daniels just wants to hire someone who he can play Nintendo with.

At any rate, here’s a quick look at the final five:

This is a tough call. Hillman is a local boy and looks quite qualified, and would appear to be gaining valuable experience managing professional players in Japan (oh, wait…major league baseball doesn’t consider Japan to be professional baseball. Never mind). But is he over there managing or is he on some weird convert Japan to Christianity thing?

Acta is probably the most qualified, but he’s also the whore candidate…spreading his love everywhere this offseason. Still, I like the fact he’s handled real professional players for many years and won with them.

Wakamatsu knows the system better than anyone. And it’s not as if he’s competing against outside people who are more experienced than he is.

Russell is considered a fantastic managerial prospect and could wind up having the longest managing career of any of these five once it’s all said and done.

Washington needs to get away from Oakland, and Texas can screw a division rival by hiring him away from the A’s.

By RotoRob
This entry was posted on Tuesday, October 24th, 2006 at 5:48 pm and is filed under RotoRob. You can follow any responses to this entry through the RSS 2.0 feed. You can leave a response, or trackback from your own site.