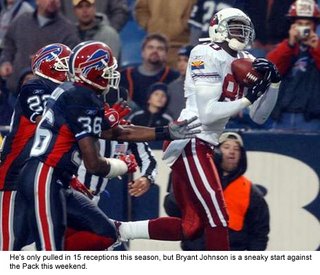 Arizona at Green Bay – How dare you, Arizona. Anquan Boldin is still a top wide out, and Bryant Johnson is a sleeper pick. You might have to start Edgerrin James, but he’s not a must-start. The Packers have some decent sneaky starts this week. Brett Favre, Ahman Green, Donald Driver and even Greg Jennings (if healthy) make for good picks.

Atlanta at Cincinnati – Wait. Mike Vick is a quarterback too? I was going to write about how Vick does after successful passing weeks, but they don’t really happen often enough for me to find a trend. Basically, keep Vick in the lineup until he proves you wrong for trusting him. Warrick Dunn will find running room and Alge Crumpler might just be back.

Carson Palmer is starting to look more and more comfortable as the weeks go by. Atlanta has a decent pass defense, but Cincinnati’s signal caller is regaining his weekly fantasy starter status. Last year, Rudi Johnson started slowly, and then scored 10 touchdowns over the final eight games. Expect him to turn his season around again in the second half of the season. Chad Johnson has certainly had a tough go of it thus far, but he’s still putting up just enough to warrant a start. T.J. Houshmandzadeh continues to be the best option in the Bengals’ passing game.

Baltimore at New Orleans – Kyle Boller. May I say what is on the mind of every Ravens’ fan and every fantasy owner who is using a Raven? AHHHHHHHHHHHH!!!! Ahem. Don’t buy what Mark Clayton did a couple weeks ago before Baltimore’s bye. His two touchdowns were both thanks to very fortuitous bounces. Don’t think about starting Jamal Lewis or Derrick Mason. Only Todd Heap should be attempting to get you points from this group.

The Saints are also coming off a bye, but they are in much better shape. Two weeks ago, the Ravens gave up 366 passing yards to Jake Delhomme, which makes using Drew Brees an interesting idea. I’m going to go out on a limb and say Brees is a sneaky start. The Saints’ offense will be on the field quite a bit. As long as Deuce McAllister is healthy, he will put up good enough yardage numbers to be used as a flex player. In the receiving game, stick with Marques Colston. Joe Horn is a third wide out or flex player.

Houston at Tennessee – Andre Johnson and David Carr should click against a Tennessee pass defense that is merely average. Other than that, only consider Owen Daniels, as he has more touchdowns (three) than any other rookie tight end. The Titans, meanwhile, have started to find their offensive identity. Travis Henry has over 300 rushing yards in his last two games and Vince Young has been the best rookie quarterback in the NFL this season. And he never dated Paris Hilton. Obviously, those two things are related.

Jacksonville at Philadelphia – Seven points? Seven points?! Yes, Byron Leftwich was a bit dinged up, but managing only seven points against a defense as bad as the Texans have is inexcusable. Because of that, I can’t recommend starting Byron Leftwich against an Eagles’ pass defense that has also been poor. Fred Taylor is a marginal start, as is Reggie Williams.

The Eagles’ offense continues to mow down opponents. Donovan McNabb, Brian Westbrook, Reggie Brown and L.J. Smith have all been incredible this season. Now that Dont’ Stallworth appears to be probable to go, he can also be used as a fantasy starter in a third wide out or flex position. This contest might also be the game of the week from an NFL standpoint. You have two teams that want nothing more than to prove last week’s terrible loss is behind them.

Seattle at Kansas City – With the Super Bowl Loser curse in effect, the Seahawks have fallen on hard times. First Shaun Alexander goes down with an injury and now Matt Hasselbeck will miss around three weeks. Sadly, the result is that this once bountiful fantasy squad has been reduced to one legitimate starter: Darrell Jackson.

The Chiefs’ offense, on the other hand, started out slowly. But thanks to a rejuvenated Larry Johnson and a cool, calm, collected Damon Huard, Kansas City is clicking. Johnson is an obvious start, but don’t ignore Huard. He’s a sneaky start in this game. I don’t feel as if the Seahawks will be able to hold onto the ball that well. Tony Gonzalez is coming around, but stay away from the other members of the passing game. One might have a good day, but at this point, there’s no way to tell which one that will be.

San Francisco at Chicago – This is the buzzkill game. The ‘Niners’ offense has played well, especially Frank Gore, but the Bears’ defense knows a thing or two about shutting down good offenses. The only bright spot for the 49ers is that they played Chicago in the preseason and moved the ball effectively against its first stringers, but is that enough to warrant a start for Alex Smith or Gore? At best, Gore is a flex player this week. Antonio Bryant is a sneaky start, as we’ve seen top wide outs do well against the Bears.

I guess it’s too soon to panic with the Bears’ offense. That being said, the game against Arizona was one of the worst fantasy displays I’ve ever seen. Rex Grossman should bounce back. Bernard Berrian and Muhsin Muhammad are both fantasy starts. I think Thomas Jones is a bit of a sleeper pick. The Bears will need to get the run game involved, since it’s something they didn’t do against the Cardinals.

By Andy Goldstein
Tags: Bryant Johnson
This entry was posted on Thursday, October 26th, 2006 at 1:04 pm and is filed under Andy Goldstein, Gridiron Goldstein. You can follow any responses to this entry through the RSS 2.0 feed. Both comments and pings are currently closed.