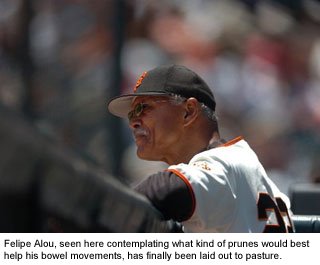 This season passed without a a single manager losing his job. But as soon as the season ended, all hell broke loose.

Among the teams still seeking a new skipper is the San Francisco Giants, who finally realized that the dynamics required for a manager have changed since the days before electricity, and they did the humanitarian thing by setting Felipe Alou adrift on an ice floe.

There are several candidates to replace the old guy, but the situation is complicated by the fact that it’s still unclear what the Giants plan to do with Barry Bonds. Any potential manager will need to know first if he’s signing on to deal with that headache or not.

Lou Piniella was the early favourite, but he begged off, saying San Francisco was too far from his home in Tampa Bay. Since then, he’s landed the Cubs’ job. That cuts his travel distance by 1,391.49 miles for those scoring at home.

The Giants have already interviewed long-time coach Ron Wotus, originally considered the early favourite. He’s spent the last 16 years in the organization, so he’s certainly the sentimental choice. Plus, if the San Francisco does re-sign Bonds, as many believe it will, Wotus knows the drill.

Bruce Bochy has emerged as a possibility after being rebuffed by the Cubs. For some reason, San Diego has decided to let teams interview Bochy despite the fact he’s led them to four post-season appearances in a dozen seasons, including the past two — the first time in club history that the Padres have had back-to-back playoff showings.

The word is that San Francisco plans to interview Bochy, but has yet to formally ask permission from San Diego to do so. The Padres, meanwhile, seem quite willing to let Bochy talk to anyone — even a division rival.

Giants’ GM Brian Sabean interviewed Angels’ pitching coach Bud Black on Wednesday. Black has long been considered a good managerial candidate because of the excellent work he’s done building the Halos’ pitching staff, but until this year, he declined all chances at manager gigs. Now, he’s ready, but the A’s are also looking at him.

Another candidate the Giants have yet to interview is Manny Acta, the Mets’ third base coach. San Francisco wanted to wait until the Mets were out before talking to him, but it may be too late, as Acta is considered a front runner for the vacant gig in Texas.

So it looks like the Giants will wait until the end to talk to Bochy, perhaps because he’s the favourite. Of course, the A’s may also be interested in him, so if the Giants don’t want to miss out on their second choice, they better move quick.

In the end, given the Bonds situation, perhaps going with Wotus, the first man interviewed, is the best choice. I am reminded of the acronym KISS that my journalism professors used to write on my copy: Keep It Simple, Stupid.

By RotoRob
This entry was posted on Sunday, October 22nd, 2006 at 1:39 pm and is filed under RotoRob. You can follow any responses to this entry through the RSS 2.0 feed. You can leave a response, or trackback from your own site.