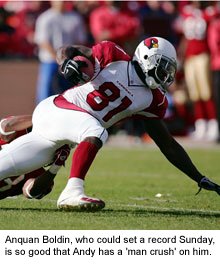 San Diego at Kansas City – Admit it. You were worried last week. Oh no, Martyball’s new meaning was a running back by committee, wasn’t it!? Okay, I was a little bit worried too. But, that’s a distant memory now thanks to LaDainian Tomlinson’s four touchdowns. All is well in fantasy football. Philip Rivers is creeping up into the top 10 for fantasy quarterbacks. Unfortunately, I have to make him something of a surprising sit, with the way Kansas City has played the pass. Obviously, you’re going to start Antonio Gates and consider Vincent Jackson a very deep sleeper at the wide out position.

Go ahead and confess. You’re worried about Larry Johnson. Oh no, without Willie Roaf, he has no room to run, right!? Okay, I’m a bit worried too. But Johnson still scored a touchdown last week. The Chargers have a great run defense, but Willie Parker did run well against them earlier. I don’t know if Johnson is a must start, but he’s probably going to be one of your top two options. Avoid Damon Huard and the passing game. In fact, even Tony Gonzalez isn’t worth playing.

Denver at Cleveland – Maybe it was just me, but I wasn’t too impressed with the Broncos’ lackluster performance against the Raiders. In fact, it might have been the worst effort of the season by any team in the NFL. Therefore, other than Tatum Bell, don’t go out of your way to start anyone in this game. The Browns’ prognosis isn’t too much better. Kellen Winslow is having a breakout campaign, but no one else should be starting.

Arizona at Oakland – Quick, what team has the number one ranked pass defense in the league? That’s right, it’s your always entertaining Oakland Raiders. Of course, this can mostly be attributed to their awful run defense. Teams get up early and stop passing, which inflates the Raiders’ pass defense. Expect Matt Leinart to throw for 250 yards and one or two touchdowns. Edgerrin James is a decent second option at running back and Bryant Johnson is a sleeper pick at wide out. Oh, and Anquan Boldin will break an NFL record that has been held for over 40 years if he gets a catch. It would be the quickest any NFL player has ever gotten to 300 catches in a career. With a reception on Sunday, Boldin would have taken 47 games, breaking the current record of 54 games, held by Lionel Taylor. Yeah, Boldin is good.

Minnesota at Seattle – Ah, the ‘Poison Pill‘ game. The focus will certainly be on Steve Hutchinson and the Vikings’ ground game, but this isn’t a friendly matchup for Chester Taylor. He’s a marginal second fantasy option at best. Steer clear of the Vikings’ pass game.

The Seahawks, on the other hand, should put up some points in this one. We saw both Darrell Jackson and Deion Branch put up great statistics last week, and both are starts again this week. Similarly, keep rolling with Matt Hasselbeck. He is creeping back into top 10 fantasy quarterback land.

Washington at Indianapolis – Peter King thinks that the Colts’ signing of Booger McFarland will make Clinton Portis a fantasy sit this weekend. I’m going to go out on a limb here and say I disagree. While McFarland is a decent addition, they still haven’t addressed the other 10 guys on the field that make this defense the worst unit in the NFL against the run. Start Portis. And only read King’s fantasy columns for laughs. Santana Moss is a start and Chris Cooley has seemingly regained his form. We all know what we’re doing with Colts’ players. I don’t have to tell you who to start there.

N.Y. Giants at Dallas – Last year, the Giants and Cowboys played two games where neither team scored more than 17 points. This will change. Terrell Owens has been added to the mix. Eli Manning has another year of experience under his belt. Right now, the Cowboys and Giants are fourth and sixth, respectively, in NFL scoring. Start Julius Jones, Owens and Terry Glenn. Even Drew Bledsoe is a sneaky start. On the other side, go with Manning, Tiki Barber, Plaxico Burress and Jeremy Shockey. Even Amani Toomer is a sleeper pick. It should be a fun one. Probably not as crazy as last week’s Monday Night game, but still enjoyable.

By Andy Goldstein
This entry was posted on Saturday, October 21st, 2006 at 1:40 pm and is filed under Andy Goldstein, FOOTBALL, Gridiron Goldstein. You can follow any responses to this entry through the RSS 2.0 feed. You can skip to the end and leave a response. Pinging is currently not allowed.