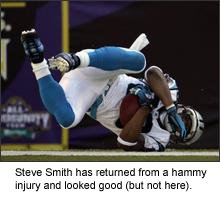 Carolina at Cincinnati – This week’s capsule preview starts with two teams that haven’t played each other since 2002. It’s not exactly a rivalry. You know to start Steve Smith, as he’s come back from the hamstring injury effectively. Jake Delhomme is a solid option against the pedestrian Bengals’ pass defense. The sneaky start here is DeShaun Foster. Expect 100 yards and maybe a touchdown from him.

Cincinnati has been something of an enigma this season. The offense started strong, but has fallen back recently. It’s too soon to panic with these guys, though. Carolina will give up yardage, so start Carson Palmer, Rudi Johnson, Chad Johnson and T.J. Houshmandzadeh as you normally would. Maybe I should have put Houshmandzadeh in front of Johnson? That’s where the better player goes, right? Oh…snap.

Detroit at N.Y. Jets – Bravo, NFL schedule makers. Well done. I can’t thank you enough for this one. Even FOX doesn’t know what to do with its scheduling of this one. Anyway, Jon Kitna is a solid start along with Roy Williams. Those two have been as good as any duo in the league. Also, Kevin Jones is having something of a breakout season. My apologies for doubting his ability to get to 100 yards, which he did last week for the first time since 2004.

Chad Pennington is a sneaky bye-week start as he faces an outmatched Detroit secondary. Of course, this means that Laveranues Coles is a great start and Jerricho Cotchery should be considered a good third wide out or flex player. Leave both Kevan Barlow and Leon Washington on the bench. The Lions have a stout run defense, and neither back will get enough carries to put up adequate statistics.

Green Bay at Miami – I’m not one to ruffle feathers (uh huh), but I’m pretty sure Greg Jennings is the number one wide out in Green Bay. Sorry, Donald Driver supporters. Injury or no injury to Driver, expect Jennings to put up bigger stats down the road. That being said, only consider Jennings a start in the passing game for the Packers this week. Also, wait to see how Ahman Green and Noah Herron split time before giving either a starting nod.

Thanks to last week’s acceptable performance, I can talk about the Dolphins without throwing up a little bit in my mouth. And believe it or not, I think Joey Harrington is a deep sneaky bye-week start. The Packers do have the league’s worst pass defense, after all. Also start Ronnie Brown and Chris Chambers. They are both just scraping by, but doing enough to warrant starts.

Jacksonville at Houston – Surprisingly, the Jaguars have been a very fantasy-friendly entity this season. Start Byron Leftwich, Fred Taylor and Reggie Williams with confidence. If you need a bye-week flex fill in, consider Maurice Jones-Drew. The diminutive backup has four touchdowns in his last three games. Did I mention they’re playing the Texans? Expect plenty of points.

New England at Buffalo – This is one of those games where looking at past performances actually has merit. Unfortunately, it’s not all that pretty for the Bills. Willis McGahee has had some success, especially when it comes to yardage, but he’s been inconsistent. For whatever reason, I have a gut feeling he’ll score a touchdown in this game. He seems due. Leave J.P. Losman on the bench, but go ahead and start Lee Evans. The third-year wide out is having something of a breakout campaign.

Unfortunately for Corey Dillon and Laurence Maroney, the running-back-by-committee seems to be a permanent fixture this year, barring injuries. Both are worth flex spots and you can get away with starting either as a second back. Leave Tom Brady and everyone in the passing game on the bench. They struggled earlier in the season against the Bills.

Philadelphia at Tampa Bay – Not to pat myself on the back, but someone who writes fantasy football columns here at RotoRob showed that they should be writing NFL analysis as well (scroll down to the Eagles/Saints’ game). Err, anyway, Donovan McNabb is not to be benched until further notice. The same goes for Brian Westbrook. Even though the Eagles don’t run the ball, the shifty back will get it done through the air. If Dont’ Stallworth is out, consider Reggie Brown a solid first fantasy wide out. If Stallworth plays, Brown is a solid second option. I normally try to not talk about tight ends, but L.J. Smith is having a nice year, so I’ll mention his name. He should feel special.

Under Bruce Gradkowski’s careful eye, the Bucs’ offense is once again making fantasy noise. In the preseason, I pegged Michael Clayton as a sleeper. It hasn’t worked out so far, but maybe last week’s performance was a sign of that changing? Maybe? Pretty please? Anyway, Joey Galloway is still the top option, and a good one this week. Clayton is a deep sleeper because of the horrible Eagles’ pass defense. Carnell Williams is even a good play since running backs have eaten the Eagles up lately.

Pittsburgh at Atlanta – As my partner over at www.mvpff.com said earlier this week, this could be the shortest game in NFL history. Both teams will run the ball as much as possible. That means Willie Parker is a good start and Warrick Dunn is a marginal one. I wouldn’t go out of my way to start Mike Vick, who is my surprising sit of the week. He makes his name by running, and the Steelers won’t have any of it.

The intriguing play is Ben Roethlisberger. He came around last week in a big way. The Falcons’ pass defense is good, but they can be beat. If the game stays close the whole way through, Roethlisberger should put up stellar numbers. My fear is that the Steelers get ahead early and then run 50 times.

By Andy Goldstein
This entry was posted on Friday, October 20th, 2006 at 3:56 pm and is filed under Andy Goldstein, Gridiron Goldstein. You can follow any responses to this entry through the RSS 2.0 feed. You can leave a response, or trackback from your own site.