Brave New World for the Padres? 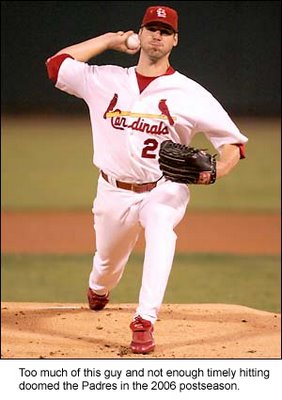 The San Diego Padres have made no secret of the fact that they would love to follow the Atlanta Braves’ model of building successful teams. And while 14 straight division titles is a ways off, the Pads have made good progress in creating a solid foundation capable of sustaining a winner for some time.

Sure, they are fresh off taking it on the chin against the Cards in the NLDS — again. Of course, too much Chris Carpenter and not enough timely hitting (2-for-32 with runners in scoring position for the series) did them in this time. And even if they were favoured heading into this series against a reeling Cards’ squad, San Diego has to take solace in achieving a first for the franchise in its 38-year history: back-to-back playoff appearances.

The Padres turned things around in 2004, starting a run of three straight winning seasons, the last two of which have resulted in post-season play. So while there must be great disappointment in San Diego over the fact that the team can’t seem to figure out how to beat St. Louis, there’s plenty of reason for optimism as well.

Let’s run down the club’s 25-man roster and see how things look for 2007 and beyond for the Padres.

The upshot is San Diego has a strong bullpen, solid core of young starting pitchers to build around, a good, young infield (except third) and a decent outfield (that’s especially strong defensively) that needs another stick to beef up its offensive potential.

By RotoRob
This entry was posted on Wednesday, October 11th, 2006 at 12:12 pm and is filed under BASEBALL, RotoRob, Team report. You can follow any responses to this entry through the RSS 2.0 feed. You can skip to the end and leave a response. Pinging is currently not allowed.