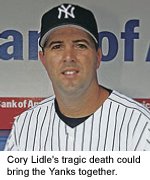 Yesterday I spent a good chunk of the afternoon working on my Offseason Lowdown column for Rotoworld. The topic? The non-stop drama that had engulfed the Yankees so far this offseason. I had just finished hammering out about 1,200 words making light of the Yanks’ plight, when I heard the news of Cory Lidle’s death.

And just like that, everything was put into perspective.

Suddenly, all that squabbling was rendered moot, and the fact that baseball is not life became crystal clear.

It got me thinking, however, that in the long run, Lidle’s death may act as the event that galvanizes a factious Yankee team.

By no means am I comparing the two events, other than the immediate fear that Lidle’s crash may have been terrorism related, but much in the way that New York City was brought together like never before by the horrible events of 9/11, perhaps too, Lidle’s death will act as a catalyst to unite the team from all the previous strife that was affecting the Yankees.

Suddenly, the failures of the supposed greatest batting lineup in post-season history that fell flat on its face last week, didn’t seem to matter any more.

The finger pointing and supposed exodus that this loss would trigger now comes across as trivial.

In my original column, I had planned to talk about how, as part of my news posting duties for Rotoworld, I spend my mornings scouring the local papers of all 30 major league teams, seeking relevant and fantasy-worthy news for the site and how lately, it takes me the better part of an hour to go through what seems like a dozen New York papers, each with seemingly 20 columnists, all with their own spins, their own agendas, their own rumor mongering and their own endless speculations. Today, however, with the NY sports media taking a moratorium on anything non-Lidle related, my complaints were rendered hollow.

I had planned to discuss how during his entire 11-year tenure with the Yankees, manager Joe Torre’s job never appeared quite as shaky as it did this week in the fallout of the ALDS disaster. For all intents and purposes, the media had him fired and Lou Piniella hired as the new man in charge. But who’s in charge of the Yankees doesn’t really matter at this moment in the wake of yesterday’s events.

The fact that Gary Sheffield and Lidle himself had indirectly laid blame for New York’s upset at the feet of Torre, while the rest of the team and general manager Brian Cashman all threw their support behind the skipper is meaningless today. Whether because of this ‘ or perhaps in spite of it ‘ George Steinbrenner decided that he’d rather not eat Torre’s $7-million salary in 2007, and he kept Joe on for a 12th year matters not at this juncture.

We now know that the team’s management will remain intact next year, and sure enough, you can expect plenty of other changes in the Bronx, but today no one is thinking about that.

In the wake of the announcement that Torre is staying, speculation grew that the chances that Alex Rodriguez is leaving are pretty darned good. But for today, A-Rod is just another Yankee who is mourning a tragic loss.

And sure, many speculated that had Piniella taken over the Yanks, A-Rod would have been back in his element, playing for the man who presided over his formative years in Seattle. But that’s neither here nor there on this day.

And while publicly, Rodriguez was saying the right things about wanting to stay with the Yankees, despite the fact that a demotion from fourth in the batting order to sixth and finally to eighth on Saturday, had to be demoralizing, embarrassing and humiliating for an athlete as proud as he, today Alex gives no thought to his spot in the batting order. Today, any embarrassment or slight seems meaningless.

That well-publicized story of a clubhouse freeze with team leader Derek Jeter that had stopped the rest of the team from accepting A-Rod as a Yank? That means nothing on this day.

All those trade rumors, like how for several weeks, A-Rod has been linked to the Angels, who are going to be seeking an upgrade at third base? Today, they take a back seat. It matters not that the asking price will be Ervin Santana and top prospect Brandon Wood for starters.

The fact that earlier this week, local media in San Diego, Seattle, Los Angeles, Florida, Baltimore and San Francisco were all fueling rumours about A-Rod deals means nothing. Today, there are no rumours — only reflection.

We know that A-Rod isn’t the only Yank who likely played his final game in pinstripes last weekend. But that can all be sorted out another time. Today, baseball trades and rumours and petty clubhouse gripes all take a backseat to life and how precious and fragile it is.

Sheffield may be doing his best to ensure the team does not pick up the $13 million option on him for next season, but no one is discussing options today. While Steinbrenner suggested that Sheffield’s return from a four-month injury absence hurt the team chemistry, then Sheffield called out Torre out for batting A-Rod eighth, saying that confused the team and gave confidence to Detroit, all that posturing is pointless now. Every person involved has heavier things weighing down his heart on this day.

Yes, it’s true that with Bobby Abreu proving he’s a great fit in New York, the team has no need for Sheffield next year, even if he hadn’t burnt his bridges. But today, Sheffield is every bit a part of this Yankee tragedy as Abreu.

Rumours that the Yanks will pick up Sheffield’s option and then trade him, just so Boston can’t get its hands on him seem silly and pointless on a day like today.

Bernie Williams’ days in New York are also probably finished. But today, the senior statesman on the Yankees gives no thought to his future in baseball.

No one cares today that starter Mike Mussina’s 2007 option is not expected to be picked up.

The fact that the Yankees have not won the World Series since Mussina joined the team does not matter in the least today.

Today, no one is calling out Jaret Wright, who helped facilitate the Game 4 disaster with a horrible outing. The fact the Yanks will probably bite the bullet and pay him a $3 million buyout does not concern anyone right now.

Stories about the fact that Chien-Ming Wang said he could have come back on short rest and pitched Game 4 if necessary, but that he wasn’t even in Detroit to help out as he was sent to New York to rest for a Game 5 that never happened? No one cares right now. Yes, Torre was ripped for this decision as well, but now, it’s irrelevant.

Yes, reliever Ron Villone is a free agent and wants to come back, but today no one wants to debate about how this might not be wise as his August and September struggles saw his ERA rise almost three runs per game in just over a month. Today, the Yankees, to a man, have greater worries.

While many of the Yanks who will remain with the team face an offseason filled with medical uncertainty, the aches and pains from a hard season do not compare with the sorrow they feel today.

Today, Mariano Rivera, who missed three weeks down the stretch with a strained forearm, does not care that he is being sent back to the doctor to ‘triple check’ that there is nothing structurally wrong with him.

Do you think Jason Giambi’s greatest concern today is his wrist, which will require arthroscopic surgery next week to repair a ligament tear? Or that Randy Johnson is giving a second thought today to his back, which Cashman believes he’ll need surgery on to fix a herniated disc? No. These men are dealing with much harsher realities today than their medical outlook.

Today, the Yankees have lost one of their own.

And in the coming weeks, when the offseason drama begins to unfold once again, let us remember what Cory Lidle gave us on this day — perspective.

By RotoRob
This entry was posted on Thursday, October 12th, 2006 at 2:30 pm and is filed under RotoRob. You can follow any responses to this entry through the RSS 2.0 feed. You can skip to the end and leave a response. Pinging is currently not allowed.