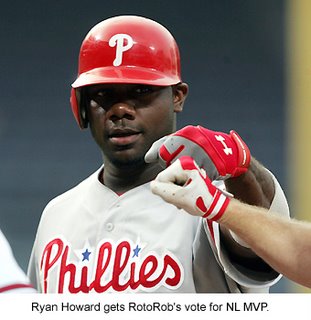 What the hell. Let’s just throw out some off the cuff MVP predictions for the National League. I will try to overlook the whole ‘well, he doesn’t play for a winning team’ argument and focus on sheer performance, with fantasy value obviously factored in. Oh, and I don’t consider pitchers for the MVP, no more than I would consider a hitter for the Cy Young. So let’s no even go there.

This is one of the most hotly contested races out there, thanks to the saw-off between Ryan Howard and Albert Pujols.

Who do you prefer? The best left-handed hitter in the league, or the best righty?

Damn, it’s close. But in the end, I opted for the behemoth from Philly, because his power just awes me.

1. Ryan Howard, 1B, PHA. It’s most unfortunate that Howard’s huge season comes at a time when any amazing displays of power will automatically come under scrutiny as being fueled by something other than mere talent. That’s a raw deal for this kid, because he’s the most exciting slugger to arrive on the scene in some time. But I don’t care…a near 60-HR season, 149 RBI, and almost 110 walks (including the Barry Bonds treatment — Howard was walked to start an inning by one team)…these are MVP numbers. Howard even proved he could hit for average, batting almost .315 and he added 104 runs. He’s the best power hitter in the game now, and deserves to have his feats recognized. But he came along at the wrong time.

2. Albert Pujols, 1B, STL. The best pure hitter in the game, and certainly the top right-handed stick in the National League if not all of baseball. He missed almost 20 games with an oblique strain, yet still set career highs in homers and RBI. He scored 119 runs, hit .331 and struck out only 50 times, compared to 92 walks, giving him the best batting eye in the NL. Pujols led the NL in OBP (.431) and slugging (.671). That’s friggin’ impressive, downright Bonds-like, but he’ll still have to take a backseat to Howard. Pujols won the MVP last season when many believed that they were more rewarding candidates (Derrek Lee and Andruw Jones) in what some said was a consolation because Pujols had been shut out in previous, more deserving years. So any chance for the sympathy vote for Pujols is non-existent.

3. Miguel Cabrera, 3B, FLA. This guy has some future MVP awards in him, no doubt. He’s only 23 and has developed into one of the top hitters in the game. Although Cabrera’s power numbers slipped a bit this year (26 homers, 114 RBI — nice “down” year, eh?), he enjoyed his finest season by setting personal bests in runs (112), doubles (50), walks (86), steals (nine) and across the board with his percentages (.339/.430/.568). Cabrera also cut his strikeouts as he keeps maturing as an overall offensive player.

4. Jose Reyes, SS, NYM. He’s the straw that stirs the Mets’ potent offense, but considering the firepower this club has, it’s hard to say how valuable he really is on this particular team. Still, when you have a leadoff hitter with power (30 doubles, 17 triples, 19 homers, 81 RBI) and speed (64 steals) who is learning how to get on base (53 walks, .354 OBP), and plays a great shortstop, that’s pretty darn sweet. He scored 122 runs and had 194 hits to top off the best season of his young career.

5. Freddy Sanchez, IF, PIT. What, are you kidding me? Maybe it’s a sentimental vote here for a guy who has persevered and finally got his due, but what Sanchez did this year — essentially without an everyday job — is remarkable. A .344 mark to win a batting title and a 200-hit season from a guy who qualified at every infield position except first base is truly amazing. He hit 53 doubles, scored 85 and drove in 85. Maybe I’m taking a purely fantasy value approach here, because his multi-positional eligibility impresses the hell out of me, but I would use one of my MVP votes on Sanchez. There are probably much more worthy candidates, but guys like Sanchez are what drives winning baseball teams. Of course, that doesn’t explain the Pirates in 2006. If only they could figure out how to clone Sanchez. Also factoring into my decision in the probability that this is by far a career year for Sanchez and he’ll never again be in such rarified air. So let’s throw the former Bosox farmhand a bone (ahah, the real reason for RotoRob’s fondness of Sanchez emerges).

7. Nick Johnson, 1B, WAS. I sense a trend here. Johnson is another long-time prospect who has had to overcome obstacles, in his case losing time early in his career sitting on the Yankee bench and a host of injuries. But 2006 marked a fantastic breakout for this on-base machine that went completely unnoticed in a crappy Nationals’ season. Johnson is one of those players who falls under the ‘I wonder what he’d do if he ever got 500 at-bats’ category. Well, despite a broken leg costing him the final week and change, Johnson did reach 500 at-bats for the first time this year. And the results were darned sweet: 100 runs, .290, 46 doubles, 23 homers, 110 walks, .520 SLG and he even stole 10 bases for the first time. And when it comes to strike zone judgment and patience, few are better in the biz. Johnson led the NL in walks per plate appearance, was second in pitches per plate appearance and third in OBP. This is not a sexy pick, but Johnson deserves kudos nonetheless.

8. Alfonso Soriano, LF, WAS. The sport’s first 40-40-40 (homers, doubles, steals) man ever. Impressive. Soriano led the NL in extra-base hits and heads into free agency ready to cash in big time. I might have ranked him higher, certainly above Johnson, if he weren’t such an ass.

9. Chase Utley, 2B, PHA. Obviously everyone will remember his fantastic 35-game hitting streak, but Utley has become the best-hitting second baseman in the game. He scored 131 runs, had his first 200-hit season, recorded 40 doubles and 32 homers, had over 100 RBI swiped 15 and hit .309. Only a poor August held him back from mentioned among the truly elite.

10. Juan Pierre, CF, Cubs. Another probable unpopular choice playing for a weak (and I mean weak) team. Pierre scuffled badly during the first couple months of the season, but then suddenly, something clicked. (It was probably his agent telling him ‘Dude, you’re in a contract year! Snap out of it.’) Whatever the case, Pierre was dynamite down the stretch, hitting .311 with an OPS 176 points higher after the break and winding up with 204 hits (his fourth 200-hit season) and 58 steals. He had a career high 32 doubles and tied career bests with 13 triples and three homers. Pierre also continued to be among the top contact hitters in the game, fanning just 38 times.

Honourable mention (in no particular order): Pat Burrell, LF, PHA (this guy is vilified in Philly for his defensive play and lack of clutch hitting, but despite reduced playing time, he put up good power numbers and is one of the most patient hitters in baseball); Adam Dunn, LF, CIN (power and patience, but a boatload of strikeouts and scary defense); Carlos Beltran, CF, NYM (among the best all-around players in the NL, but he still can’t hit in front of the home crowd at Shea); Carlos Delgado, 1B, NYM (fantastic power, but what happened to his average?); Luis Gonzalez, LF, ARZ (gets a nod in his Arizona swan song for being the oldest player ever to reach 50 doubles); Dave Roberts, LF, SD (without fanfare, had possibly his best year right in time for free agency); Matt Holliday, LF and Garrett Atkins, 3B, COL (try telling these two that the offense at Coors has dried up); Andruw Jones, CF, ATL (couldn’t repeat MVP-type 2005 season, but nothing wrong with 40 homers and 129 RBI with good on-base skills); Jason Bay, LF, PIT (Canadian kid enjoyed his best power year, but steals and average slipped); Hanley Ramirez, SS, FLA (what a dynamic presence he brings to the top of the Marlins order; the Red Sox could have used some of that); David Wright, 3B, NYM (the kid keeps getting better and will soon own NY like Derek Jeter); and Jimmy Rollins, SS, PHA (the power is starting to really develop, so he could soon find himself a more ideal No. 3 man than leadoff).

By RotoRob
This entry was posted on Tuesday, October 10th, 2006 at 11:18 am and is filed under BASEBALL, RotoRob. You can follow any responses to this entry through the RSS 2.0 feed. You can skip to the end and leave a response. Pinging is currently not allowed.