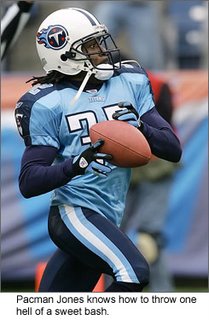 Washington at N.Y. Giants – The NFC East is usually thought of as a conservative division with lots of running and good defense. Well, not anymore. The points are flowing like Cristal at Pac Man Jones’ birthday party. Mark Brunell is a sneaky bye week start against the Giants’ sad pass defense. Clinton Portis should run well, but I still feel as though the air attack will take precedence. Santana Moss is a start, but the rest of the receivers will divide Brunell’s other numbers.

The Giants should also thrive in the passing game. Eli Manning should find Plaxico Burress, Amani Toomer and Jeremy Shockey all day. Even Tiki Barber will factor in with good receiving numbers. Barber may struggle on the ground, but overall will be a weak first or solid second fantasy back. All around, expect a lot of points in this contest.

Kansas City at Arizona – Trent Green and Kurt Warner are out. Enter Damon Huard and Matt Leinart. That’s not quite the matchup anyone would have expected early in the year. Both are high risk/high reward plays this week. Huard has been steady and might have some fun against the Cardinals. Leinart looked like a rookie when he got into the action last week, but Arizona obviously has the wide outs necessary for good quarterback statistics.

Larry Johnson is an obvious start, as is Tony Gonzalez, assuming he’s healthy. Even Eddie Kennison might be a marginal play as he had a touchdown last week. For the Cardinals, Edgerrin James hasn’t been great, but he is still a fantasy factor. He’s a start in this one. Anquan Boldin struggled last week, but can you really afford to bench him now? Larry Fitzgerald hasn’t been practicing, but as long as he plays, he’s a start. One of the wide outs will probably succeed.

N.Y. Jets at Jacksonville – Jacksonville is a strange fantasy entity. When it plays opponents that it should wipe the floor with, it gets very conservative and tends to disappoint. When the Jags play quality opponents, they rise to the occasion and put up stellar numbers. I don’t know if Byron Leftwich is the best route this week. I expect the Jaguars to try to run the ball a lot. Fred Taylor is a start and Maurice Jones-Drew isn’t the worst flex player. Of the Jaguar wide outs, only Reggie Williams is worth playing. Matt Jones continues to have injury worries while Ernest Wilford hasn’t played well this year.

As of this writing, Chad Pennington possesses the second-highest quarterback rating in the NFL. Everyone who saw that coming needs a medal. At some point the good times will end, and I’ll go out on a limb and say it will end this week. Laveranues Coles has injury concerns and the running game is still awful. Only Jerricho Cotchery is worth starting if Coles is indeed out or limited.

Oakland at San Francisco – What a great game! LaMont Jordan is a must start thanks to last week’s breakout performance. Randy Moss is not. He’s essentially punted on the season. On the other side of the ball, Frank Gore is a strong flex player. His fumble problem may have cost him his goal-line duties, but he’s still running well. Antonio Bryant is a sneaky start, and I have a hunch Eric Johnson will have a good game. Alex Smith is a guy I’d wait on. He will have some good games later in the season, but it’s too early to rely on him week in, week out.

Dallas at Philadelphia – So Donovan McNabb is a good play. Unfortunately the rest of the Eagles’ offense is banged up. Brian Westbrook, Dont’ Stallworth and Reggie Brown are all questionable or doubtful. Correl Buckhalter is still the first handcuff to Westbrook, but Dallas’ run defense makes it a moot point. Greg Lewis and Hank Baskett played well last week, but I have my doubts about either one putting up great statistics. L.J. Smith is an obvious start.

The Cowboys will get good numbers from Drew Bledsoe, Terry Glenn and Jason Witten. All should be in your starting lineup. I am wary of Julius Jones. Only once in his career has he had two straight 100-yard games. Don’t expect another one this week. I feel like I’m forgetting someone here. I just can’t put my finger on it though. TOo bad, I guess.

Pittsburgh at San Diego – The final two games pit four of the league’s most imposing defenses against each other. As is often the case in sports, great defense tends to overpower great offense, so don’t expect a ton of fantasy success in these matches. The Steelers had very little success running against the Chargers in last year’s meeting, so I don’t expect Willie Parker to do much. He is a surprising sit. Ben Roethlisberger has been awful this season, and last year against the Chargers he had a statistically poor game despite playing well. Needless to say, find another quarterback this week. If Hines Ward plays, he and Heath Miller would both be marginal starts. One should grab a touchdown.

LaDainian Tomlinson was solid against the Steelers last year, and it will be much of the same this time around. He should again surpass 100 total yards and also pick up a touchdown. Antonio Gates has been frustrating in 2006, but I’m going to call him something of a sneaky start this week. Yes, calling the reigning top tight end a sneaky start might seem silly, but I expect San Diego to be put into throwing positions much earlier this week which means better stats for Gates.

Baltimore at Denver – Other than Jamal Lewis and Tatum Bell, there isn’t much to be thrilled about on the offensive sides for either team. The defenses combined have only allowed five offensive touchdowns in eight total games. Way to go ESPN, maybe next week you can thrill us with a 1985 Bears vs. 1976 Steelers snoozefest?

By Andy Goldstein
Tags: Adam Pacman Jones
This entry was posted on Saturday, October 7th, 2006 at 1:15 pm and is filed under Andy Goldstein, FOOTBALL, Gridiron Goldstein. You can follow any responses to this entry through the RSS 2.0 feed. Both comments and pings are currently closed.