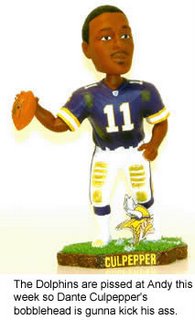 Week Five is approaching, so go away and read the first part of the previews while you’re not stomping on someone’s head.

Buffalo at Chicago – The Bills are the next vict…err…opponents for the voracious Bears. J.P Losman has played good, controlled football to this point in the season while Buffalo relies heavily on Willis McGahee. Think of McGahee as a weak second option this week. He will pick up some yardage, but would be very lucky to cross the stripe. The only other player to even consider starting is Lee Evans. Wide outs have had some limited success against Chicago in terms of yardage. Again, don’t expect any touchdowns.

The Bears have not been a solely defensive team so far this season. The offense has come out blistering behind Rex Grossman. Yes, Rex Grossman. I struggle comprehending this as well. I think there will be better options this week than Grossman. He has yet to put up a good all-around game against a solid pass defense and the Bills will be the highest ranked one he’s faced so far this season. Thomas Jones, on the other hand, will find some running room for the second week in a row. Muhsin Muhammad, Bernard Berrian and Desmond Clark are all serviceable options, but I don’t expect huge games from any of them.

Cleveland at Carolina – Apparently Reuben Droughns is still in the NFL. I nearly forgot about that until last week’s 100-yard game. It’s a good sign for a guy who is still a bit banged up. Against Carolina, he’s a decent second fantasy back (as long as he’s healthy, that is). Braylon Edwards and Kellen Winslow Jr. will continue to be solid.

The Panthers have gold sitting on their bench at the moment. DeAngelo Williams has 176 total yards in essentially one game’s worth of action. What is the comprehension problem here? Anyway, DeShaun Foster will continue to see more carries and is a good second back against the Browns’ shoddy run defense. You know what you’re doing with Jake Delhomme and Steve Smith.

Detroit at Minnesota – The Lions have been involved in two straight shootouts, which is always fantasy fun. This game may not be quite as explosive, but points should still go up for both sides. Jon Kitna is working on two straight two touchdown games and will be a threat for another. He’s a sneaky bye week fill-in. Kevin Jones might be at the peak of his value, which means he’s not a bad guy to shop around to other owners. Expect his numbers to come down this weekend. Roy Williams is an obvious start, but I’d give Mike Furrey another week to prove his worth, since his own teammate is essentially laying the hate on him.

Miami at New England – With the running game working so effectively, the Patriots haven’t needed to throw the ball. This is fantasy poison for Tom Brady owners. Expect that to continue this week against the Dolphins. Corey Dillon and Laurence Maroney continue to split the carries, which means fantasy owners are still not totally happy. If you can only start one, go with Maroney. He’s a weak second option while Dillon is better suited as a flex player. Oh, the Dolphins are playing and what about them? I’m boycotting the act of writing about them. When they behave properly, I’ll lift the boycott.

St. Louis at Green Bay – Thank you fantasy gods, for you have sent down a bountiful gift with this contest. Marc Bulger? Yes. Torry Holt and Isaac Bruce? By all means. Stephen Jackson? Of course. Brett Favre? If healthy, sure. Greg Jennings? What’s stopping you? Also keep an eye on Donald Driver’s health status. He’s a go if he plays.

Tampa Bay at New Orleans – Welcome Bruce Gr*coughcough*ski! It’s so nice to have you. Carnell Williams is at best a marginal start since the Saints and the rest of the world will be keying on the Bucs’ running game this weekend. It will be interesting to see how the rookie handles Joey Galloway and Michael Clayton. It’s possible he’ll develop a rapport with one of them.

Drew Brees has become one of the harder quarterbacks to gauge this season. He seems to either struggle to contribute at all, or he goes off for huge numbers. I think it might be the former in this game. With a rookie quarterback on the other side, the Bucs will try to play ball-control with the running game and the Saints will try to get an early lead and control the clock with their ground attack. This makes Deuce McAllister a weak first and good second fantasy back while Reggie Bush is a weak second and good flex pick. The Bucs’ run defense will again be torn up. Of the receiving options, only Marques Colston has been consistent, and he’s turning into a weekly starter.

Tennessee at Indianapolis – Remember that Dolphins’ boycott? I’m extending it to the Titans as well. I’m not playing around anymore. Shape up or ship out. The Colts’ passing game has been very bizarre this year. Peyton Manning is putting up decent numbers and Marvin Harrison and Reggie Wayne are getting yards, but where are the wide out touchdowns? Harrison and Wayne have a grand total of zero TDs.

By Andy Goldstein
This entry was posted on Friday, October 6th, 2006 at 11:41 am and is filed under Andy Goldstein, FOOTBALL, Gridiron Goldstein. You can follow any responses to this entry through the RSS 2.0 feed. You can leave a response, or trackback from your own site.