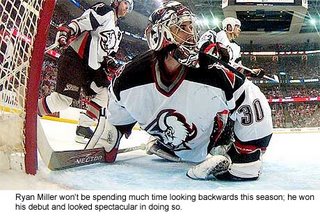 Welcome to the debut of Ice Chips, where each week I’ll recap the week that was in the NHL and help you prepare your fantasy team for the week to come.

Well, it’s hard to give an update when only a handful of games have been played, but since this looks to be a regular Friday thing, let’s review what’s happened so far:

By Mike Chen
This entry was posted on Friday, October 6th, 2006 at 11:31 am and is filed under HOCKEY, Ice Chips, Mike Chen. You can follow any responses to this entry through the RSS 2.0 feed. You can leave a response, or trackback from your own site.