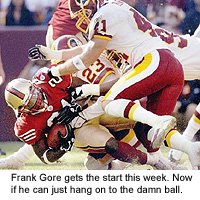 San Francisco at Kansas City – Welcome to what could very well be the highest-scoring contest of the week. Good news for Frank Gore fans as the breakout back has been named the starter for Week Four. Now he just needs to hang on to the football. Consider him a solid second option this week. Alex Smith, meanwhile, is enjoying a stellar campaign of his own. The Chiefs are a friendly matchup and Smith is a great bye-week starter. Antonio Bryant and Eric Johnson will be the main cogs in the passing attack. Start them at will.

Kansas City’s offense will revolve around Larry Johnson. The pre-season top three selection has been held out of the endzone thus far, but he’s still putting up the yardage numbers he was expected to. You don’t need me to tell you to start him. Tony Gonzalez was banged up a couple weeks ago, but he’s a good start as long as he’s healthy. Leave Eddie Kennison on the bench.

Detroit at St. Louis – This should be another offensive onslaught with Mike Martz’s new offense going against Martz’s old offense. I think both sides will want to prove they don’t need the other. Jon Kitna is a sneaky start. He torched an overmatched Green Bay defense last week and should do the same to St. Louis this week. Kevin Jones actually had a good game last week, but for a guy who hasn’t had a 100-yard effort since Week 16 of the 2004 season, you’d kind of like to see him have sustained success. He’s a marginal start at best. Roy Williams is a go, but the rest of the receiving crew is a no.

The Rams finally showed up offensively last week, which is nice to see. Marc Bulger should continue where Brett Favre left off. He’s a start. Steven Jackson has yet to find the endzone, but in yardage-heavy leagues, he’s still been a stud. Torry Holt is a go and Isaac Bruce might have one of the better games of his season this Sunday. Poor Kevin Curtis. He seems to be the odd man out with Martz gone.

Cleveland at Oakland – The circus side show that is the Oakland Raiders returns to the field this Sunday and I have to say, I couldn’t be much more excited about it. The stars have aligned to make for what should be a year-long thrill ride. The Browns should reap the benefits this week and many of their players are starters. Charlie Frye is a sneaky start while Braylon Edwards and Kellen Winslow are good ones. Reuben Droughns would have been a good pick, but he is currently listed as questionable. If he regains his health in time, he would be another sneaky bye-week start.

On one hand, I can’t imagine the Raiders can be quite as large a disaster as they have all season. They’ve played a couple tough defenses and are coming off a bye week. On the other hand, the coaches and players are same. Well, the Raiders can’t possible be worse than they have been in their first two games. LaMont Jordan is a marginal start against a Browns’ defense that has been hit and miss. Randy Moss should be considered a weak second or strong third fantasy wide out.

Jacksonville at Washington – The Jaguars played well from an NFL standpoint last week as they gave the Colts a tough game. From a fantasy perspective, however, there aren’t many positive words that can be attached to it. Byron Leftwich and the pass game might as well have not shown up. The run game produced, but how many fantasy owners had Maurice Jones-Drew in their lineups? Fred Taylor is still the starter and a decent start this week, but owners should handcuff with Jones-Drew. Matt Jones is a good start, as he should find the endzone this week, but be careful with any other member of the the air game.

The Redskins are all about Clinton Portis. When he is on the field, they are a much more dangerous team. Unfortunately, the Jaguars are as unfriendly a running back matchup as any in the league. Of course, if Peyton Manning can get a cheap running touchdown against the Jags, I will give Portis the benefit of the doubt. Mark Brunell broke the record for ‘Being the Most Boring Quarterback Ever’ last week. (Yep, I tell it like it is.) He is to be avoided and only Santana Moss should get a passing thought for a starting position.

New England at Cincinnati – With Corey Dillon no longer on the injury report, the Patriots will go back to being a very boring, very frustrating offensive group. Dillon will get more carries, but Laurence Maroney will be more exciting. Both are decent flex options. Unfortunately, Dillon’s return also hampers Tom Brady. If the running game is clicking, the Patriots shy away from passing the ball.

Carson Palmer regained his touchdown form last week, but also developed an alarming trend for turning the ball over. His touchdown ways should continue, but let’s hope the interceptions and fumbles don’t. He’s an obvious start. Rudi Johnson struggled last week, but he’s been a consistent running back for years now. He’ll bounce back just fine. Chad Johnson also struggled, but he’s too much of a difference maker to sit this week. Consider T.J. Houshmandzadeh a great second option. Chris Henry is tempting, but I believe more in Johnson.

Seattle at Chicago – I have bad news for Shaun Alexander owners: Maurice Morris is starting for the Seahawks Sunday. I have bad news for Maurice Morris owners: Maurice Morris isn’t that good and will not be a good option this week. Also, I’ve filled my Maurice Morris quota for the time being. Matt Hasselbeck is a sneaky start. The Seahawks won’t be able to run the ball, so they’ll have to throw aplenty and that’s the one area where the Bears aren’t quite all-world. They are good, but they do have a slight weakness in the secondary. Darrell Jackson is also a good start, but no one knows who else in that passing game will see a lot of action yet. Wait on Deion Branch if you aren’t desperate.

The Bears also have some bad news for this week. Rex Grossman has been great, but he hasn’t faced a defense like that of the Seahawks. He’ll be lucky to break 225 yards and more than one touchdown. The only Chicago offensive player to start is Muhsin Muhammad. Anyone else is a severe gamble.

Green Bay at Philadelphia – Start ’em if you got ’em. Other than Ahman Green, everyone from both sides should perform well. It’s Monday night, Tony Kornheiser and Joe Theismann will be quibbling, and the Packers will ensure the scoreboard is lit well. I love ending on positive notes.

By Andy Goldstein
This entry was posted on Saturday, September 30th, 2006 at 12:49 pm and is filed under Andy Goldstein, FOOTBALL. You can follow any responses to this entry through the RSS 2.0 feed. You can skip to the end and leave a response. Pinging is currently not allowed.