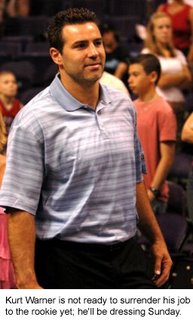 Arizona at Atlanta – So Kurt Warner is starting. Eat it ESPN. Does anyone really believe the Cardinals Changed their minds? about their starting quarterback? I didn’t think so. Anyway, he’s a marginal start against an average Falcons’ pass defense. It would be nice to see the former MVP put up solid numbers before blindly trusting him again. Edgerrin James has started to warm up and remains a good option. You know what to do with Anquan Boldin and Larry Fitzgerald.

In case you missed last week, Mike Vick didn’t play so well. The Falcons’ quarterback/running back has the ability to look like a world beater one week and then turn into a highschool player the following game. And I don’t mean like in the commercial. Anyways, bad games happen, so he’s a start against a porous Cardinals’ team. Warrick Dunn should also get back on track with Alge Crumpler. But I’d avoid the rest of the team.

Dallas at Tennessee – It’s been a pretty boring week for the Cowboys. Not much going on at all. Anyway, Drew Bledsoe is a sneaky start this week, even if Terrell Owens doesn’t play. The Titans can’t stop anyone not named Daunt’, so expect the passing game to do well. Owens, Terry Glenn and Jason Witten are all starts. Julius Jones is also a sneaky start. He’s run very well thus far. As for the Titans, all I need to say is Drew Bennett. Period. Let’s move on.

Indianapolis at N.Y. Jets – Everyone knows the story for the Colts. Start Peyton Manning, Marvin Harrison, Reggie Wayne and Dallas Clark. The running game should still be avoided at all costs. The Jets, meanwhile, are in a similar boat. You can actually start Chad Pennington, Laveranues Coles and even Jerricho Cotchery. Again, stay away from the vaunted Jets’ running attack.

Miami at Houston – All right, Daunt’ Culpepper. I’m not playing around anymore. You’re not a must-start, even against the Texans. How does that grab you? That being said, if there ever is a time that he’ll have a good game, it would be this week. Just don’t feel obligated to start him over a comparable option. Ronnie Brown is a good start and Chris Chambers is another marginal one. If the passing game can’t click against the Titans, why would it suddenly succeed against the Texans?

As for the Texans, David Carr is becoming a safe option for 200 yards and two touchdowns. Expect about those numbers again this week. I can’t believe I still have to talk about Ron Dayne. Miami’s run defense hasn’t given up a touchdown, so even if you are a Dayne supporter, (seek help) this week isn’t the week to start him. Andre Johnson is a start and Eric Moulds might be a sneaky one. He certainly knows the Dolphins’ defense well.

Minnesota at Buffalo – All hail Chester Taylor. Coming into Week Four, he’s sixth in the league in rushing yards. Despite a tough Bills’ defense, Taylor should continue to get the carries and maybe even a score. If Troy Williamson suits up, he’d be the only legitimate target in the Vikings’ passing game.

Willis McGahee isn’t afraid of Taylor, of course. The Bills’ running back leads the league in rushing yards but faces a very tough front four this week. He’s almost a must-start just because of the yardage, but temper expectations a little bit. Lee Evans had his first 100-yard game of the year last week and is creeping up to become a decent number three fantasy wide out. Just don’t tell opposing defenses.

New Orleans at Carolina – The Saints are becoming a team that is pretty simple to diagnose from a fantasy standpoint. Drew Brees is a good start against the easier pass defenses (which Carolina isn’t) while Deuce McAllister and Reggie Bush are both decent flex options. Marques Colston is coming into his own and is a great third wide out. Leave Joe Horn on your bench until he proves he can regain his past form.

The Panthers saved their season last week with a come-from-behind-after-being-way-ahead win last week against the Bucs. Steve Smith, by the way, played and had 112 yards. He also was targeted 14 times, which is more than any other NFL wide out in Week Three. If he’s on the field, he’s a stud. If he’s on the field, it also makes Jake Delhomme a legitimate fantasy quarterback. Unfortunately the Saints have been deadly against the pass. He’s a marginal start at best this week.

San Diego at Baltimore – So you want the game of the week? I’ll give you the game of the week. LaDainian Tomlinson and Antonio Gates going up against Ray Lewis and Terrell Suggs? I’m game. Yes, it’s as tough a matchup as any offensive player can have at this point, but that’s what makes a stud a stud. You never bench them. Also watch Vincent Jackson for the Chargers. He’s one of the few healthy wide outs they have, so he might be a guy to take a flier on.

The Ravens’ offense has been subpar through the first three weeks of the season, but this might have more to do with the fact that they have been in garbage time a lot. Last week was the first competitive game they had, and Steve McNair, Derrick Mason and Jamal Lewis all put up decent numbers. McNair and Mason should click again, but San Diego’s run defense is stout. You might want to consider benching Lewis if you have a comparable option.

By Andy Goldstein
This entry was posted on Friday, September 29th, 2006 at 5:05 pm and is filed under Andy Goldstein, FOOTBALL. You can follow any responses to this entry through the RSS 2.0 feed. You can skip to the end and leave a response. Pinging is currently not allowed.