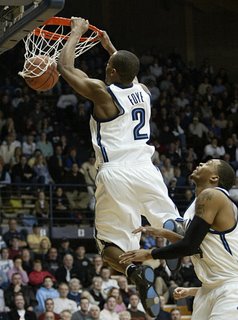 Portland selected Randy Foye with the seventh pick in the draft (a pick they acquired earlier on Draft Day from Boston) and then flipped him to Minnesota for Brandon Roy, whom the T-Wolves had grabbed at number six.

Are we straight here? Foye is now with Minnesota, and, thanks to a knee injury to Rashad McCants, the Villanova star has a chance to be the T-Wolves’ starting shooting guard to begin the season.

The 6’4′, 205-pound guard, who turns 23 next month, enjoyed a breakout season for the Wildcats, developing into one of the top guards on the East coast as he continued to improve as the season wore on. In his senior season, Foye set career highs with 34.7 MPG, 20.5 PPG, 5.8 RPG, 1.41 A/T ratio, 0.6 BPG, and 35 per cent three-point shooting as he was named a finalist for the Wooden Award and took home honours as the Big East Player of the Year. The year was capped off by an appearance in the Elite Eight in the NCAA Tournament.

By the time he was done, Foye wrapped up his college career as the eighth-leading scorer in Villanova history with 1,966 points (behind the likes of all-time leader Kerry Kittles). This came on the heels of a stellar high school career in which he averaged 22 points, six assists and six rebounds per game as a senior at East Side High, being named the New Jersey High School Player of the Year before heading to ‘Nova.

Foye showed an ability to step up in big games last December when he nailed 14 of 21 from the field for a career-high 32 points to lead the Cats over Oklahoma, at the time the fifth-ranked school in the country. As a sophomore, he sunk the winning basket with time running out to beat Seton Hall in the first round of the Big East Tourney. And in his junior year, Foye averaged 20 PPG in three NCAA Tourney games.

Although he manned the point in college, Foye was spared from having to truly run the offensive show because Villanova coach Jay Wright often employed a four-guard offense. In reality, Foye is more of a combo guard. He plays a spirited game and that caused him to get in plenty of foul trouble, but Foye improved in that area during his final two seasons of college.

Foye is a talented player who’s been compared to Chauncey Billups. And even while he’s improved as a field general, it’s not his real strength, and that’s why he’ll probably see more time at the two spot than at the point, especially now that Minnesota has added Mike James. Actually, playing with James might be interesting for Foye, because many have said that they have a similar game ‘ they’re both shoot-first guards who will never hesitate to fire away, so ball distribution may be an issue for the T-Wolves this season.

An AP All-American First Team selection as a senior, Foye brings a lot of skills to the table, notably a quick first step that makes him a dangerous one-on-one player. He was a pure scorer in college, showing tremendous ability to create space to shoot. He stays under control in the lane, and is strong to the hoop.

He’s an aggressive player who knows how to play winning basketball, something that has been sorely lacking in Minnesota the past couple of years. Foye is exactly the kind of player the T-Wolves need to return to contention in the West, and having James there to help mentor him might be a wise move, or it could be a case of having two players who are essentially doing the same job.

One concern is whether Foye will have enough size to play the two guard. He’s a great leaper, and can play in traffic, but many believe he’s not really as tall as his listed 6’4’. If he doesn’t have the skills to be a point guard, and lacks the size for shooting guard, Foye could wind up as an undersized role player’a sixth man capable of providing a nice scoring touch off the bench but not having to worry about being the leader on the floor. That’s not necessarily a bad thing, however. Plenty of guards like John Starks, Darrell Armstrong and Earl Boykins have carved out solid careers as sixth men.

Judging by how high he was picked, Minnesota definitely has big plans for Foye, as he should be one of the most valuable rookies from a fantasy perspective this year. He has at least until January, the earliest McCants will return, to establish his pecking order in the Minnesota backcourt. And ironically, given that they were swapped for each other on Draft Day, it may ultimately wind up being Roy and Foye who slug it out for the ROY. Let’s just hope the trophy engraver doesn’t screw that one up!

By RotoRob
Tags: NBA
This entry was posted on Thursday, August 24th, 2006 at 1:36 pm and is filed under BASKETBALL, Draft report, RotoRob. You can follow any responses to this entry through the RSS 2.0 feed. Both comments and pings are currently closed.