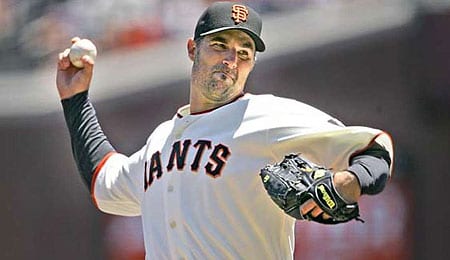 We know, we know. You’re really not supposed to pay too much attention to the standings until Memorial Day. But when the Giants sat at 14-17 on May 7, dead last in the NL West, things looked grim.

Barry Bonds couldn’t hit a ball out of a laboratory, never mind into McCovey Bay; big off-season free agent acquisition Matt Morris had an ERA of 6.16; and Moises Alou had just landed on the DL for the 387th time in his career.

The Giants have gone 37-31 since, including a season-high five-game winning streak that was snapped Sunday that briefly put San Francisco on top in the NL’s Wild West division.

However, Sunday’s loss in extra innings to the Padres, the team the Giants are currently battling with for NL West supremacy, exposed a weakness that will need to be addressed.

Heading into the ninth inning up 5-4, San Francisco was just three outs away from a four-game sweep of San Diego that would have extended the club’s lead to a game and a half. But closer Armando Benitez, long criticized for his inability to perform in high-pressure situations, surrendered a game-tying home run to Terrmel Sledge — just Sledge’s second long ball since the end of the 2004 season.

Then in the 12th, Brian Wilson (no, not that Brian Wilson) — only up because Tim Worrell is injured again — gave up the go-ahead run and soon after, the Giants’ short-lived division lead was no more.

For Benitez, that’s five blown saves against 13 conversions, not a great success rate. He’s simply no longer a dominating pitcher; in fact, his K/9 rate is down for the seventh straight year. Just think about that.

Wilson has not pitched well, and is a short-term solution at this point.

Previously, Jack Taschner and Scott Munter both failed miserably and had to be demoted. Tyler Walker was traded to Tampa Bay for a minor leaguer and Jeff Fassero finally outlived his usefulness and was DFAed.

Worrell was horrible, so the injury is addition by subtraction and Jeremy Accardo showed promise despite his poor command, before being traded last week in the Shea Hillenbrand deal.

On the plus side, Brad Hennessey has performed admirably as the long reliever/spot starter, while Jonathan Sanchez has established himself as Benitez’s heir apparent. Veteran southpaw Steve Kline, despite poor command, has gotten by so far, while Kevin Correia has also gotten decent results despite walking too many batters.

The Giants added Vinny Chulk in the Hillenbrand deal, and he should benefit from the move to AT&T Park, as he’s shown greatly improved command this year but it hasn’t manifested itself in results… yet.

The Giants relievers’ ERA of 4.64 is among the worst in baseball. Another arm to strengthen and bolster that Giant pen is needed, but we’ve seen how much Cincy had to pay to improve its relief corps.

Ironically, the team’s strength on offense — strike zone judgment — is exactly what’s hurting it on the mound: too many walks, not enough strikeouts. San Francisco’s hitters have struck out fewer than any major league team while drawing the ninth-most walks. However, its pitchers have the fourth-fewest strikeouts and sixth-most walks allowed. Crazy stuff.

And who would have ever thought that just six teams would have fewer home runs than the Giants? Here’s a team with the greatest home run hitter of our generation and it’s struggling to find power sources. Will Hillenbrand help? Depends how much you value clubhouse chemistry. He can hit, yes, but will Felipe Alou want to hit him? John Gibbons sure wanted to.

The Giants kick off a three-game set against the Nats Tuesday, and they need to take two out of three against a struggling Washington club. Morris takes the mound in the opener, and notwithstanding his latest start, he’s been spectacular lately, really turning his season around. Since June 9, Morris is 5-0, 3.30 and he’s now over .500 for the year, while trimming his previously bloated ERA under 4.50.

Barring a complete collapse, and assuming it does not deal Jason Schmidt (not a sure thing, by all means), San Francisco will hang around in the race on the basis that no one team appears capable of grabbing the West and running with it.

But will 2006 be the year Barry Bonds finally gets his championship?

We’d suggest it’s far more likely that he’ll be wearing an orange jumpsuit than sporting a ring this time next year.