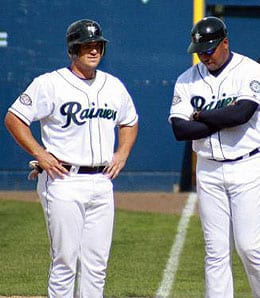 Jeff Clement (left) has competition as the Seattle catcher of the future. (Inside Pittsburgh Sports)

Today, we offer up some tasty Fantasy tidbits about the Mariners’ newest catching prospect.

By RotoRob
Tags: Adam Moore, Everett Aqua Sox, Fantasy Baseball, Jeff Clement, Nebraska, Seattle Mariners, University of Texas-Arlington Mavericks, Wisconsin Timber Rattlers
This entry was posted on Tuesday, July 25th, 2006 at 10:53 pm and is filed under BASEBALL, Draft report, Fantasy Notes, Prospects, RotoRob. You can follow any responses to this entry through the RSS 2.0 feed. You can skip to the end and leave a response. Pinging is currently not allowed.