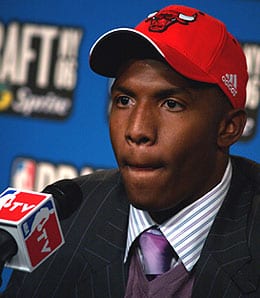 Tyrus Thomas could be a shot-blocking machine.

Not many players can offer the mix of athletic tools and length that Tyrus Thomas brings to the table.

Small wonder, then, why the power forward from LSU was taken fourth overall by the Portland Trail Blazers.

However, Thomas will never toil for the Jail Blazers, because as part of their draft day trading frenzy, they dealt his rights, along with Viktor Khyrapa, to the Bulls for the rights to LaMarcus Aldridge.

Thomas’ ability to leap made him a feared shot blocker, averaging 3.1 per game. His efforts were recognized when he was named SEC Freshman of the Year.

The thin and wiry (6’9″, 218) Thomas turns 20 next month, and among the players he’s drawn comparisons to are Shawn Marion and Stromile Swift (except with much more energy than the underachieving Swift ever has shown). He’s got great agility for a big man and he should earn plenty of time off the bench with the Bulls, backing up the power and small forward positions.

If Andres Nocioni can’t cut it as a starter at SF, there’s even a chance Thomas could move into the starting lineup later in the season. For now, Chicago has plenty of bench options, so Thomas will have to earn more PT. He’s off to a good start, however, having made a favourable impression in Summer League play.

By RotoRob
Tags: Andres Nocioni, Baton Rouge, Chicago Bulls, LaMarcus Aldridge, LSU, NBA, Portland Trail Blazers, SEC, Shawn Marion, Stromile Swift, Summer League, Tyrus Thomas, Viktor Khyrapa
This entry was posted on Monday, July 24th, 2006 at 1:51 pm and is filed under BASKETBALL, Draft report, RotoRob, Scouting Report. You can follow any responses to this entry through the RSS 2.0 feed. You can leave a response, or trackback from your own site.