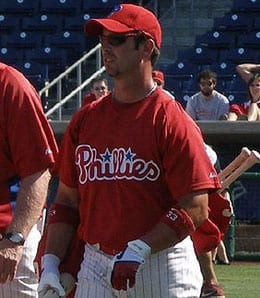 Aaron Rowand’s whiff with the bases loaded was a pivotal moment.

Well, that wasn’t much of a nailbiter. I expected Saturday evening’s Jays-Phils bout to be full of fireworks as each nation celebrates its respective birthdays. Well, the Phils’ pyrotechnics must have been stopped at customs (you are, after all, bugging us slack-off Canadians to crack down on those borders), while the Jays had plenty of their own in an easy 8-1 shelling.

As promised, I kept a close eye on Casey Janssen tonight, and he’s clearly shaken his funk. He got into some serious trouble in the first, though. And without a big strikeout of Aaron Rowand with the bases juiced, Janssen’s night could have gone a bit more like his counterpart Adam Bernero’s did. It took him 32 pitches to get through that tough first, but Janssen was in cruise control after that.

All told, it was an impressive outing for the rook. Six shutout innings with just five hits and two walks allowed against three strikeouts. He threw 66 strikes and 41 balls, and did a very good job of starting the Phils off with strikes. Janssen is now 6-6 for the season.

Don’t look now, but the Jays have actually won four straight for the first time this season. And Eric Hinske, in perhaps the biggest shock of the night, was batting leadoff, a first in his professional career. Imagine our surprise when we saw a man who doesn’t exactly look like he’s built for speed (and in fact, more resembles someone who rather enjoys partaking in this) batting at the top of a lineup of men under the age of 55. So what does he do? Bounces a tape-measure homer off the restaurant window in straight away centre (a gargantuan shot) and ends the game with an airborne, full out stretch diving catch in right field. Apparently, someone has a bit of a Superman complex these days.

By RotoRob
Tags: Aaron Rowand, Adam Bernero, Casey Janssen, Eric Hinske, Philadelphia Phillies, Superman, Toronto Blue Jays
This entry was posted on Saturday, July 1st, 2006 at 12:00 am and is filed under BASEBALL, Game report, RotoRob. You can follow any responses to this entry through the RSS 2.0 feed. Responses are currently closed, but you can trackback from your own site.