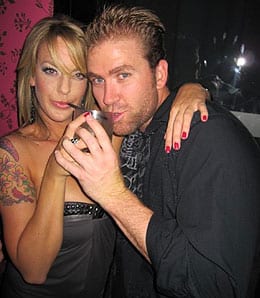 Will Casey Janssen be able to tear himself away from his barfly tart to make the start for the Jays?

I’ve got a busy weekend planned, as the wifey-type unit and I are headed down to the Dome… er, Rogers Centre to catch the weekend series against the Phillies. Casey Janssen goes for the Jays Friday and it’s my first chance to see him live, so I will try to file a report on him either later tonight or tomorrow some time. He looked superb a few starts ago against the Angels in a game I caught on the tube, but it looks like the rest of the league has been catching up to him lately. Let’s see what happens Friday. (Go Phils! This is the first chance I’ve had to see the Phillies, who are my second favourite team, in person since since the 1993 World Series.)

I also have to write Spikes Up, my baseball column for CREATiVESPORTS.com, and get going on my essay for BaseballNotebook.com. All the while, I’m doing the editing for CREATiVESPORTS.com’s MLB mid-season kit. So it’s a busy few days which may mean a reduction in posting. But not to worry… I’ll try to get some juicy tidbits up at some point. Mmm… juicy.

By RotoRob
Tags: Casey Janssen, Los Angeles Angels, Philadelphia Phillies, Toronto Blue Jays
This entry was posted on Friday, June 30th, 2006 at 3:05 pm and is filed under BASEBALL, RotoRob. You can follow any responses to this entry through the RSS 2.0 feed. Responses are currently closed, but you can trackback from your own site.