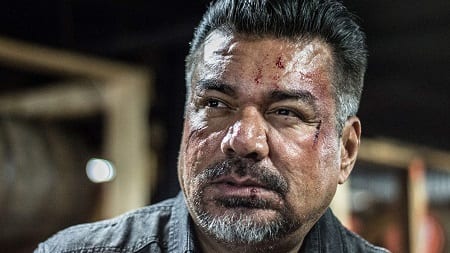 Written and directed by the heretofore unknown Wes Miller, River Runs Red takes a serious and topical subject — the shooting deaths of young African-Americans and other POC by law enforcement officers — and puts an “eye for an eye” spin on it. Backed by a cast featuring some well-known actors, the film looked to have some potential. Time to see if it can deliver.

Bringing himself up from nothing, Charles Coleman (Taye Diggs) now serves as a judge in the city of Louisville, Kentucky. He and his police officer wife Eve (Jennifer Tao) have a son together, CJ (Joseph Belk), who has been accepted to the academy. On the day he’s set to start he borrows his father’s BMW and drives around, eventually flashing a peace sign at a pair of officers, though one of them claims he flipped them off.

During the traffic stop, Von (Luke Hemsworth) sees CJ reaching for his wallet and believes him to be going for a gun, prompting his partner Rory (Gianni Capaldi) to fire into the car, killing CJ in the process. Rory then plants a gun, making it a justifiable homicide. When city and federal agencies sign off on the officers’ version of events, Eve quits the force and Charles is in shock, turning to an old detective friend (John Cusack) to investigate.

When it appears that the same gun, alleged to be CJ’s, was at the scene of two officer-involved shootings, Charles goes to visit the father of the previous victim, Javier (George Lopez), to encourage him to sue the city. When Javier declines, Charles continues to push, and the pair eventually decide that the only way to get justice for their sons is to take matters into their own hands.

There’s a solid premise at the core of River Runs Red, even if the execution feels a bit ham fisted. While Luke isn’t the actor his brother is, he does a solid job as the conflicted cop, and Diggs, who we haven’t seen in a meaningful role since Way of the Gun, does the best of the primary characters. There’s also enough passable action to give the movie a little juice, though the chase sequence never ascends beyond feeling relatively low budget.

Despite offering an interesting entry point, the way the story is presented and the way it moves forward are both frustratingly bad. Let’s start with the pointless conversations, such as Diggs talking about how his father-in-law said some bad things to him, but when Lopez inquires as to why he’d say that, Diggs responds that he doesn’t know and doesn’t care. Awesome. Or when the Mayor asks his assistant to get the number for judicial ethics after a confrontation with Diggs and then literally never appears in the movie again.

Story advancement is also weak. One minute Diggs and his wife are mourning their son, the next they’re having a date night at home with Chinese food. One minute Diggs is telling his wife he has to remain a judge or “they win,” but as soon as the city leaks that his son was packing he’s ready to take it to the streets. At one point he threatens one of the officers that he’s going to use every resource at his disposal, then he gets raw footage of the guy murdering someone and does basically nothing with it.

There’s no depth to the cast, either, with both Diggs and Lopez saddled with completely bland wives that bring nothing to the film. Capaldi is brutal as Rory, the scummy racist cop, and his cigar monologue might just be the movie’s low point — somewhere somebody probably thought it was Tarantino-esque, it wasn’t. Later on a crew of, we guess, undercover officers show up just to do some pseudo martial arts fights with the headliners and then vanish. It’s so awkward.

Perhaps action fans can garner some enjoyment from the final act, but whatever promise River Runs Red had at the conceptual level is largely squandered by the wooden acting and poor story development.