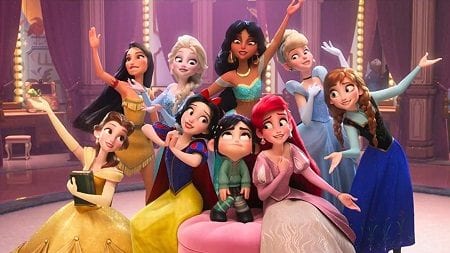 You’re welcome to let it go…

After putting a fun spin on what old arcade games and characters do in their down time with Wreck-It Ralph, writer Phil Johnston has been handed the directorial reins for the sequel as he reunites with stars John C. Reilly and Sarah Silverman for Ralph Breaks the Internet. Does it build off the original or, ahem, wreck the goodwill it built with audiences? Let’s pop a quarter in and find out.

Several years after the events of the first film we find Ralph (Reilly) and Vanellope (Silverman) still going strong as friends. While Ralph is happy in their sedentary, repetitive life, Vanellope longs for change. Hearing this, Ralph goes into Sugar Rush and creates a new path for her to drive. While this makes her happy, the person playing the game in the real world accidentally breaks the steering wheel in an attempt to get Vanellope back on the track.

With the replacement on eBay costing more money than the game generates, Mr. Litwak decides it’s time to pull the plug, leaving all of the racers homeless. Ralph, feeling responsible for what happened, decides he’ll go to the Internet — the mysterious WiFi was just hooked up by Litwak — to get the item, taking Vanellope with him. Having no concept of how things work, they accidentally bid the steering wheel up to a ridiculous amount and now have 24 hours to pay or risk losing it.

Their first attempt takes them to the online game Slaughter Race in which they attempt to steal an ultra rare car that they can then sell for real money. While that fails, they meet Shank (Gal Gadot), who directs them to BuzzzTube where viral videos can net them cash quick. As the pair try to earn enough money to save Sugar Rush, Vanellope starts to think she’d be happier staying online, a decision Ralph won’t understand.

We usually save the phrase “world design” for video games, but the folks behind Ralph deserve a lot of credit for taking the Internet and turning it into a physical realm. The manifestations of pop ups, spam blockers, search engines, websites and more are really clever, and it ends up making the world of the Internet the star of the movie, much more so than Ralph or Vanellope.

Within that world exists tons of winks, nods and Easter eggs, making this the kind of movie you could rewatch dozens of times and still find something new. One of our favourites was when Ralph ventured into the “dark web” and found abandoned chat rooms, a dial-up train and other nods to the Internet’s early stages. There are also lots of cameos from various video game characters and other Disney properties. It’s fun stuff.

By far the best singular idea here is the implementation of Disney’s princesses. They all start out in full garb, but when they spy Vanellope’s casual wear they trade in their clothes for all-new comfier garb, each with clever slogans relating to the movies they starred in. It’s more than just a glorified cameo, too, as they return to factor into the final act.

In a lot of ways, Ralph Breaks the Internet is more a collection of clever gags and fun moments rather than a fully formed motion picture. The main story is predictable and clunky, and there are times when Ralph and Vanellope become more annoying than anything else. We like Silverman, but her voice for the character can be grating and loud, while Ralph’s loutish adherence to the status quo gets monotonous.

After being featured players in the original, Felix (Jack McBrayer) and Calhoun (Jane Lynch) are largely kicked to the curb this time around despite a potentially entertaining storyline wherein they “adopt” the remaining Sugar Rush girls. We see a little of it in the deleted scenes, but more could’ve been done with it to break up the main plot, which might’ve helped with the annoyance that comes from overexposure to the primary characters.

Five deleted scenes are included, though as with most animated films you’re primarily getting storyboards with voiceovers. They reference pacing as the main reason for their omissions, but we wouldn’t have minded more of the Felix/Calhoun story, even though the movie is on the long side. A making of featurette entitled “How We Broke the Internet” is entertaining and worth a watch if you enjoyed the film.

Despite some legitimate shortcomings with the film’s plot, Ralph Breaks the Internet succeeds with its inspired world design and dozens of clever gags and cameos.