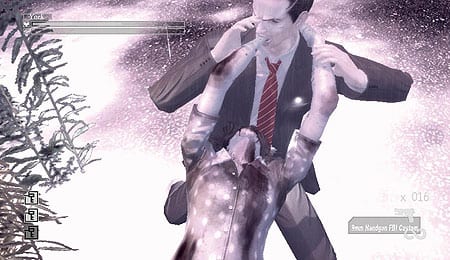 Dentist zombies are among some of the worst.

Are you there, Zach? Deadly Premonition: The Director’s Cut is out? Zach, have you ever noticed that whenever a movie is released in stores as a “Director’s Cut” they always offer a litany of special features? Possibly even improvements to the original piece? Did someone drop the ball, Zach?

It’s in the coffee, Zach…

Featuring a much-improved control set from the original release, Deadly Premonition: The Director’s Cut actually feels much more intuitive than before. Now, instead of the main combat button being assigned to a face button, it is bound to a trigger to make it worlds easier to line up a shot on an enemy and dispatch him. Aside from some mapping changes, the controls are pretty similar to the initial release of the game. Moving and looking around as York uses the left and right sticks, respectively, and weapons are now changeable by using the directional pad.

During the driving segments of the game, I’m afraid there’s no refinement in controls good enough to make the driving any fun — the cars are extremely touchy and seem to not have power steering, as soon as you stop turning, the wheels snap straight-forward again, making a simple 90-degree turn somewhat of a risky chore.

All-in-all the controls work wonderfully for the action sequences, and not at all for the driving. You’re also able to use the PlayStation Move set as a control option, which I personally did not get a chance to try out. Just don’t try driving.

The town of Greenvale is a dreary one — it’s often raining with some thunder and lightning for flavour. Improving upon the original game’s graphics, ToyBox Inc. has given things a facelift with some HD textures and the option to play with Stereoscopic 3D enabled. Though the characters and environments look drastically improved from the original, it is not without its own trouble.

Unfortunately, the frame rate is among the most inconsistent and stutter ridden I’ve ever seen in a game, and the jerkiness of the graphics can make certain gameplay sections (firing your weapon, driving, or even walking through the rain) a chore to grind through. Thankfully, combat is not the primary focus, nor is driving. Character models and lip-syncing are serviceable enough, though clipping is noticeable and very frequent.

On the other hand, the soundtrack is wonderfully reminiscent of Firefly, with its western twang. Voice acting quality seems to vary between character to character — sometimes acceptable, and sometimes so bad that it can bring you out of the moment. Other sound effects in the game tend to grind on you with their repetitiveness, such as the footsteps or door opening noises (opening a rusty steel door and a wooden one use the same sound effect). Sometimes during loading scenes and saving, sound will skip and come out of sync, but it’ll right itself during the next load sequence or line of dialogue.

In Deadly Premonition: The Director’s Cut, you assume the role of Agent York, an FBI operative sent to the town of Greenvale to investigate the murder of a young woman named Anna Graham. On his journey, you’ll have to help him stay fed, awake and alert to anything and everything happening in this small, quiet town.

Agent York is constantly speaking to someone named Zach, who is assumed to be the player. He’ll ask “Zach, are you there?” and you’re tasked to respond to progress the scene. Throughout the game you’ll interview several different suspects, witnesses and regular folks that provide you with insight into the investigation, while York tends to “fill in” Zach with information he’s gathered — think of it as a TV show where a character is constantly breaking the fourth wall to fill you in on what just happened. It sounds annoying, but York’s sense of humour bleeds through and proves to be highly entertaining.

In addition to the investigation, several mundane activities await you. You may change York’s suit, shave his face and keep him fed, all of which have tiny effects on gameplay results. As far as “Director’s Cut” content goes, none of it is playable. All the stuff that was added is simply implemented into pre-existing cut scenes to add more depth to it. Disappointing, yes, but if you were one of the people satisfied with the original game, this is going to please you.

As the core gameplay goes, it is very tight. You’re allowed to roam freely around the expansive town of Greenvale and help York discover secrets and medals that add to your score. York is sometimes caught in what seems like an area of his subconscious, where it displays a hub world filled with red-leaved trees and strange noises. In this hub world, the player can interact with various items (which change often depending on progress) in order to make sense of some of the more obscure hints and realities lying within.

Combat sequences from the original version have been toned down in difficulty also, so enemies only take a few shots before succumbing. Exploring the environments also helps York with his profiling sequences, where he enters somewhat of a meditative state in order to “see” elements of the future. Missing parts of a level containing profiling hints won’t halt your progress at all, but it will make some of the mystery a little harder to decipher.

With the troubling frame rate, sound stuttering and lack of any notable additions to the gameplay itself, Deadly Premonition: The Director’s Cut may leave a sour taste in the mouths of hardcore fans of the original (but will hopefully be rectified by a patch). To the new or uninitiated, DP: TDC may come off a bit too hokey or corny, but if you embrace the humour and atmosphere you’ll be treated to one of the most unique experiences to hit home consoles in a very long time.