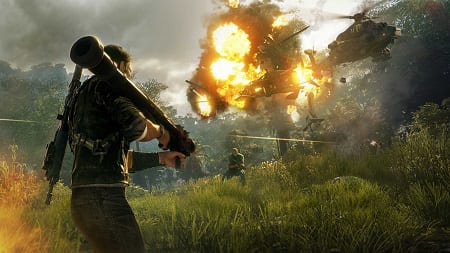 One of the long-time staples of TV advertising is the blind taste test in which they try to get people to change their perception about something. Oh, you think you like Coke? Well, you just drank Pepsi and said you preferred it! You think you’re driving a BMW? Nah son, it’s a Ford. Why do we bring this up? Well, because playing Just Cause 4 is such a similar experience to its predecessor, we half expected someone to tell us we’ve actually been playing Just Cause 3 the whole time.

When on foot you’ll once again employ the grappling hook, parachute and wingsuit to move quickly across the game’s massive world. The hook will also be a key tool during combat, allowing you to evade fire, latch onto enemy vehicles (to then be hijacked) or even the troops themselves. Your hook also has three functions as you can pull two objects together, deploy balloons to lift them into the air, or attach boosters to send them rocketing away. It’s the series’ most unique element, and one that still holds plenty of fun.

Things get spottier when you get into vehicles, however, particularly on the ground. Driving just never feels right, a problem that’s made exponentially worse by a wonky camera that absolutely refuses to allow subtle shifts. We were constantly fighting it to line up where we wanted when it was time to make any kind of turn. It’s not really an issue in the air thankfully, and we found flying helicopters to be the high point of the vehicular selections.

Still, that lack of fun is important because a lot of Just Cause 4‘s open-world challenges are built around doing stunt driving or flying, and we found that we weren’t enjoying them. Ideally they should be a reason to explore the map and give you something to do when you feel like taking a break from blowing things up, but the dicey controls really undermine that.

Maybe we’re remembering the PS3/360 consoles as being more powerful than they were, but it certainly seems like Just Cause 4 wouldn’t have looked much different on those than it does running on an Xbox One X. While the island of Solis looks nice when soaring above, it’s not much of a looker when you’re in it, and the cut scenes can be downright ugly. A lack of variety in urban locations and enemies also warrants a demerit.

Voice acting is decent, though nobody is given much to do in terms of plot or story development. An all-new GTA-esque set of radio stations allows you to listen to music or talk, which provides some entertainment for those lengthy flights and drives. In combat the mix of gunfire and explosions helps to amp up the adrenaline.

Another day, another oppressive regime to overthrow for Rico Rodriguez, who heads to the fictional island of Solis to set his sights on Oscar Espinosa, the island’s ruler and a man in possession of a weapon that can purportedly control the weather. To take him down, he and a group of guerrilla fighters must take back the land piece by piece, defeating the sinister Black Hand in the process.

As with previous JC games, the story is most definitely not the draw. There are relatively few primary missions, though they’re locked until you liberate the area that houses them, which means tackling a number of raids on various Black Hand facilities. As you do this you’ll keep pushing the front line forward and securing a foothold for the rebels. It’s an idea with some promise, but it’s not developed in any meaningful way, and the Black Hand never pushes back so there’s no ebb and flow to the liberation effort.

No matter what banner a particular mission falls under, most involve going to a location, blowing stuff up and then heading to another location to do more of the same. Putting the tools for massive and creative destruction in the hands of the player has long been one of Just Cause‘s most endearing qualities, and though we would’ve welcomed more variety, it’s still undeniably enjoyable to lay waste to buildings and woefully outmatched enemies.

To that end, Just Cause 4 is not a difficult game. Despite overwhelming odds, Rico rarely feels threatened due to his superhero-like ability to absorb punishment. Take enough damage and time will sort of slow down, allowing you to escape nine times out of 10. In fact, the vast majority of deaths came from unexpected explosions of some environmental object we didn’t realize was so close. In those instances, the game’s checkpoint system is quite forgiving.

Since destruction is the draw, JC4 is very conscious of keeping your options open, allowing you to call in supply drops with any unlocked vehicle or weapon at almost any time. Said items are acquired by securing new areas, providing the shallow conquest map with some tangible purpose as you expand your available arsenal.

Unfortunately, weather effects, arguably the game’s signature addition, aren’t particularly interesting. Yeah, they look cool rolling in, and the guns that harness them make for some fun times, but they’re underutilized and don’t fundamentally change what you’ll be doing the vast majority of your time in Solis.

Viewed as a standalone property, Just Cause 4 is a fun, action-packed experience with a forgettable story. For anyone that has already played its predecessor, however, JC4 is likely to elicit a very strong sensation of déjà vu.

It’s a good, not great, selection of modes spread across a modest total of eight maps, though they’re fairly diverse and grand in scale. What makes Battlefield V work so well is the crispness of its gameplay, which often creates a frenetic pace and awesome moments where you and a dozen others are charging through destroyed buildings to try and capture a location from the enemy.