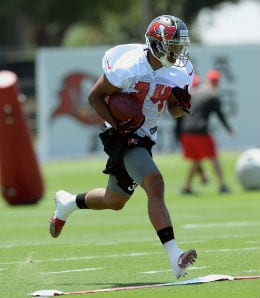 If you own Nick Foles, you are probably thinking about grabbing Mark Sanchez. Then after making a run to liquor store to clear your mind, you find that you lost a waiver tussle for Adrian Peterson? It’s okay, don’t fret. We’ve got your Start ‘em, Sit ‘em picks for Week 10.

Austin Davis, QB, St Louis Rams @ ARI: Davis is an unknown commodity for Week 10. Facing a Cardinals defense that has allowed more passing yards than any other team Davis should shine this weekend. In the first eight starts of his career, he has already thrown for 300 yards and three touchdowns twice and we have no doubt Week 10 will mark number three.

Charles Sims, RB, Tampa Bay Buccaneers @ ATL: The Bucs’ third rounder will finally see the first action of his NFL career in Week 10 against an Atlanta defense that has been kind to offenses. With Josh McCown starting and Doug Martin’s inability to produce, Sims’ opportunities will be plentiful — especially in the passing game. In PPR leagues, Sims can be trusted as high as a RB2 this weekend and in standard leagues, you can use him as a flex. The kid sounds ready to rock, as you can see in the video below.

Percy Harvin, WR, New York Jets vs. PIT: The Jets traded for Harvin two weeks ago and it’s clear they want to focus the offense around him. We expect him to be a mainstay in all lineups going forward. Harvin will get touches from the backfield and should lead his team in targets from here on out. It also helps that the Jets are finally starting the right QB.

Travis Kelce, TE, Kansas City Chiefs @ BUF: Kelce is becoming one of the best tight ends in the game. Buffalo has a stout run defense and will look to contain Jamaal Charles which will open up the passing game for Alex Smith. Kelce is a mismatch against just about any defense and is primed for a true breakout game. Start him with confidence; he will score and should lead the Chiefs in receiving.

Colin Kaepernick, QB, San Francisco 49ers @ NOR: Coming off an awful divisional loss may not be good medicine for Kaepernick. Going to a guillotine like New Orleans will force the still immature fireballer to press and we see bad decisions becoming turnovers. His abilities to gain yardage with his legs has yet to help his WRs down field. The Saints defense also just won a game on road last Thursday so they will be rested and hungry for more.

Steven Jackson, RB, Atlanta Falcons @ TB: We really mean no disrespect to the player S-Jax was but clearly “was” is the key word here. While this matchup looks awesome for Jackson on paper, consider he only compiled 54 rushing yards and zero targets in the Falcons’ blowout win vs. Tampa in Week Three. While he is the Falcons RB1, he is only averaging 50.6 yards from scrimmage per game.

Odell Beckham, WR, New York Giants @ SEA: While the whole world is still breathless over Beckham’s one-handed pre-game antics (on Monday Night Football), we feel the need to stop the music. We realize the Seahawk defense has reverted to human, but remember, this will only be Beckham’s fifth NFL contest. He has but 18 receptions and what Richard Sherman doesn’t do, Earl Thomas will finish.

Dwayne Bowe, WR, Kansas City Chiefs @ BUF: Ralph Wilson Stadium houses some of the best, most loyal and loud fans in sports. Coming from Arrowhead, Bowe is used to the noise. Yet, having faced the soft secondaries of the Chargers, Rams and Jets in recent weeks, he will be challenged to stay upright. Where the Bills defense lacks in name recognition, they make up for with bruises. Also, no Chief WR has scored a TD this season.