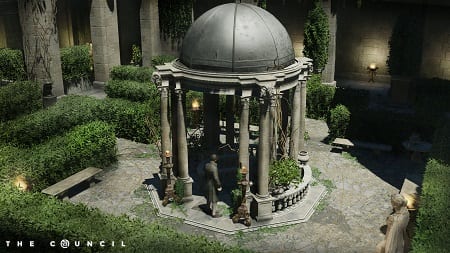 Episode 2 takes you further into the lush estate of Lord Mortimer.

The Council promised to shake up the interactive fiction genre established by Quantic Dream and popularized by TellTale. By bringing in RPG elements and abilities, The Council‘s first episode offered new takes on branching storylines and leveling up to customize your character. The second episode, Hide & Seek, brings more of the same but goes deeper. The result is a satisfying adventure that fails to break much new ground.

One of the most significant changes, though, is the addition of a murder-mystery element. The first half of the three-hour episode plays out like one of the Sherlock Holmes games, with questioning and connecting clues to witnesses and suspects. Your selected abilities really come into play here, as does the rationing of ability points.

For our playthrough, despite having a fairly broad base of abilities, our least-powered skill (logic) meant that several critical discussion choices were closed off because we didn’t have a high-enough level. This is more of the customized experienced The Council can bring, and it’s enticing considering what could come out of this model for future games.

On the flip side, the episode mostly takes place in the exact same location as the first, except instead of the outer docks, you get a hedge maze/courtyard and the room of Lord Mortimer (who’s a real person, unlike how our suspicions played out in the first episode).

There’s political intrigue as Lord Mortimer reveals a lot about himself to you, and fortunately, his character model isn’t as hideous as some of the other characters in the game. However, if you were hoping for an improvement in either the voice acting or the visuals, you’re out of luck.

Hide & Seek is a well-done episode that adds gameplay and plot layers without really shaking things up. This hopefully sets up for a game-changing middle installment.