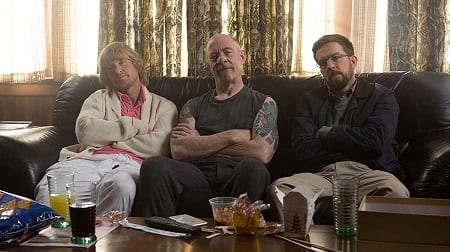 Simmons is one of several potential dads in Father Figures.

Like many, we got our introduction to Ed Helms as Andy Bernard on The Office, a background character that expanded as the show progressed. Subsequent forays into movies have reinforced our core belief about him, that a little Ed Helms goes a long way. His next endeavour is Father Figures, which pairs Helms with the always-likable Owen Wilson in a quest for two brothers to find their birth father.

Together for their mother Helen‘s (Glenn Close) wedding, fraternal twins Peter (Helms) and Kyle Reynolds (Wilson) believe their father to have died when they were young. While watching TV, however, Peter sees an actor that appears to be their dad, based on a photograph their mother gave them. When Peter confronts her, she admits their father did not die, but she was unsure who he was based on her rampant promiscuity at the time.

While Kyle seems at peace with the revelation, Peter insists on trying to track down his father, and when their mother suggests it may be Hall-of-Fame quarterback Terry Bradshaw, Kyle decides he should tag along. The two quickly meet Bradshaw, who brings them home to introduce to his wife, but after further discussions they discover the timeline doesn’t match up, and that Bradshaw couldn’t be their dad.

Bradshaw is able to point them in another direction, though, toward an investor named Roland Hunt (J.K. Simmons), and from there on it’s all about Peter and Kyle trying to track down their father from one possibility to the next. As they go, the brothers start to reconnect and straighten out some of their own issues, perhaps lessening the importance of unraveling the original mystery.

We’re not going to say Helms’ performance has realigned our thinking as to his ability to be a lead actor, but this is the most we’ve enjoyed him since his early Office years. He and Wilson — playing his typically earthy, laid back “everything will work itself out” character — have good chemistry and work well off of one another.

Most of the supporting cast follows suit, led by a surprisingly engaging and funny turn from Bradshaw, who plays up his affinity for Peter to great effect. Simmons is good as well as the financier turned thief that still lives with his mother. Even Katt Williams, whose comedic style doesn’t usually connect with us, is pretty funny as a hitchhiker the brothers pick up (and subsequently restrain).

Under the guidance of longtime cinematographer and first-time director Lawrence Sher, Father Figures somehow manages to last the better part of two hours without delivering anything of substance. The plot basically transitions from one comedic sketch to the next, and despite some parts that are fun in the moment, you’re destined to forget the film as soon as you’re done watching.

What character development there is takes too long to happen as well. Obviously the focal point of the story is the relationship between Helms and Wilson, and yet they exist around each other for more than an hour before they start filling the audience in on what that relationship means. It’s also unclear why the story called for them to be twins since it’s never used for comedic purposes. No, they’re not Arnold Schwarzenegger and Danny DeVito, but c’mon…

What movie did Close think she was making? The veteran actress just comes across as way over the top with her performance, and it really sticks out in a film where everyone else seems to be in on the joke.

More than 20 minutes of deleted scenes comprise the majority of the extras. It’s all disposable stuff, with the best scene showing Peter and Kyle as young boys living with their mother — it’s not great, but at least it fills in a little back story and shows their personalities taking shape. A short gag reel is the only other offering and is the usual collection of the actors breaking into laughter during takes.

Father Figures delivers some fun, mostly on the strength of its cast, but the lack of an interesting story arc makes it eminently forgettable.