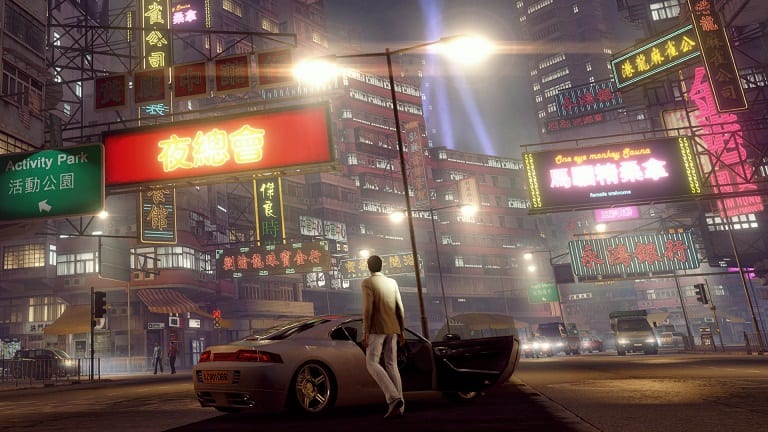 If this was Hong Kong, you’d already be dead.

Over the years a number of games have stood out to us as deserving considerably more attention than they received. Titles like Enslaved: Odyssey to the West, Singularity and Spec Ops: The Line, just to name a few. Well, at or near the top of that list is Sleeping Dogs, so when  Square-Enix decided to upgrade the graphics, add all the downloadable content and bring it to Xbox One and PlayStation 4 with the moniker of the Definitive Edition, you’d best believe we wanted to review this title.

For those that didn’t play the original release, Sleeping Dogs follows Wei Shen, an undercover cop that is infiltrating the Sun On Yee triad. It’s easy to lump the open-world setting and mission structure in with Grand Theft Auto, but it strikes a more serious tone, and having it take place in Hong Kong helps it stand out. For a more in-depth look at the game, please check out our initial review here.

As with any updated/re-mastered title, graphical improvement is one of the primary selling points. For Sleeping Dogs, however, the enhancements seem minimal. Hong Kong’s criminal underworld already made for a visually impressive experience on the 360 and PS3, so seeing it make the jump to next gen doesn’t move the needle all that much. Sure, things look a little cleaner, and it seems to run smoother, but we’re talking incremental advances here.

The other primary selling point is additional content, and Sleeping Dogs dropped a boatload of DLC following its original launch, all of which is present with the Definitive Edition. Some of said content is minor or cosmetic, such as in-game costumes for Shen to wear or vehicles to drive. There are also three fairly substantive add-ons: Nightmare in North Point, Year of the Snake and Zodiac Tournament.

Nightmare in North Point is similar to Red Dead Redemption’s Undead Nightmare, albeit on a much smaller scale. Combat is almost exclusively hand to hand here, tossing aside the guns that play a major role in the main game. It’s reasonably fun, though the undead “Jiang Shi” can be annoying both in how they fight (attaching to you and needing to be shaken off) and how you must dispatch them.

Year of the Snake takes place after the main storyline with Shen busted down to a patrolman as punishment for his rather liberal interpretation of the law during his time undercover. It follows a terrorist plot to detonate explosives in conjunction with Chinese new year. Like Nightmare, it’s worth playing through, checking in at around two hours.

Rounding out the additional content is Zodiac Tournament, which may be the best of the bunch. It channels the game’s inner Bruce Lee circa Enter The Dragon with a tournament on the aptly named Zodiac Island. It has a ’70s themed presentation, including a washed out grainy look, and there’s plenty of old kung fu flick flavour to enjoy. None of the three add-ons is truly outstanding, but if you’re a fan of the original game they’re absolutely worth playing.

Packed with all available bells and whistles, Sleeping Dogs: Definitive Edition is undeniably the best version of a really good game. If you haven’t played it and are looking for something fun on the Xbox One or PlayStation 4, it’s a great get. Whether there’s enough here to entice repeat purchases, however, is up for debate.