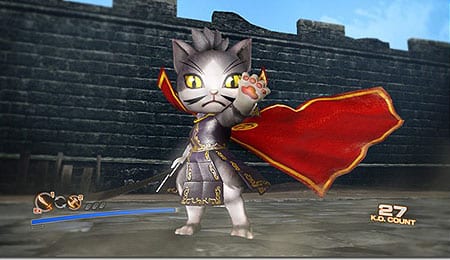 Yes, you can fight as a giant cat-man. No, there’s no hairball Musou move. That I know of.

The latest flavour dispensed by Tecmo-Koei, Dynasty Warriors 7: Empires, is more of the same, albeit with a fresher coat of paint and some serious depth. If you’re unaware of the Dynasty Warriors series, each game sets you as any number of Feudal Chinese heroes of legend. In the Empires iteration, you set yourself as a free entity on the battlefield, deciding whether or not to attack, take over a territory and ultimately whose side you’ll take (if anyone’s — you can opt to start your own kingdom).

This series has never shied away from its original control scheme because it still fits perfectly and feels great when playing. Characters are controlled with the left stick, and your various attacks are mapped to the face buttons. As per usual, the controls are very responsive and comfortable. Combos can be strung together to produce damn impressive prowess on the battlefield, and the feeling of having a character that is truly bad ass cutting through crowds of enemies is second to none.

The Dynasty Warriors franchise has never been known for its glamorous visuals — people are usually pretty critical of the draw distance of the engine. Truthfully, that’s just being nitpicky, as this installment looks pretty good compared to the last few games. Character models appear to have taken some polygonal steroids and have all received makeovers. The textures are also pretty damn good, as they do a solid job painting a convincing battlefield.

Aliasing issues are somewhat present but nothing that will damper your experience. Each character has special moves that usually dazzle the screen with pretty effects while killing a mass number of your opponents. That brings me to the enemies, which have also been reworked and all look much better than the previous titles. They do tend to pop up out of nowhere sometimes due to the draw distance, but you’ll hardly notice when cutting through the masses of peasants and soldiers.

I’m no expert on the Japanese language, but it feels like all delivered lines of dialogue are spot on and are definitely enjoyable to listen to. The soundtrack consists largely of butt-rock that is mixed with traditional Chinese music. It definitely fits the pace of the battles well, but it also really adds a layer of cheese to the otherwise historical game setting.

Tecmo-Koei has it in the bag. It has been making the same games for more than a decade now and yet continues to deliver a fun experience. In Empires, you’re able to create an officer to your liking (or from a long list of generals and soldiers), choosing from a countless list of preset configurations, weapons and clothing styles.

Once you’ve created a warrior, you import him to the main campaign where you are presented with several options. You can generally just hop right into battle and start seizing territory from an unfortunate foe, or you can spend earned money on upgrades and bonuses that can benefit your troops, territories or even yourself. You can also just kind of hang around with your soldiers and cheer them up (heal and boost them) and hire bonus-giving characters.

I personally tried playing as Lu Bu (DW fans know this guy), making him a truly friendly character that jokes with his soldiers and inspires them. Regardless of your chosen play style, it is inevitable that foes will meet your blade, and that’s where the fun really begins. You can seize a territory yourself, or choose to help another warlord with his battle.

This is where you’ll either be in an Invasion or Defense mode, where the objective is to destroy or outlast the enemy by force (destroying people) or wits (cutting off supply lines to weaken bases ahead). Siege battles also introduce machines of war, such as an arrow-puking turret of doom, or a mobile battering ram that is essentially a giant flame thrower. When victory is attained in any of these modes you’re rewarded with money to purchase upgrades or equipment for your character. Months pass by in game, represented by a pretty flutter of cherry blossom leaves blowing across the screen while hanging out in your battlements. It’s a pretty snazzy little package.

You would be hard pressed to turn down a title of this magnitude. Dynasty Warriors 7: Empires is a great example of a game that can be made when a company has a winning formula that it just keeps making better. Fans of any of the Dynasty Warriors games should love and appreciate this, and for anyone unfamiliar, well, get ready for a button-mash fest that will leave your thumbs cramped, eyes bloodshot and a brain that couldn’t be more satisfied.