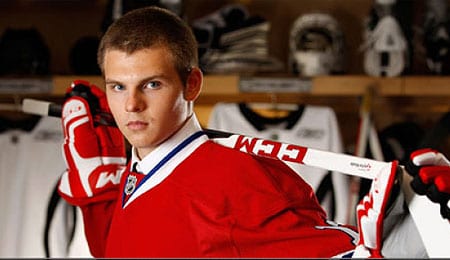 Alex Galchenyuk is making a statement for more ice time.

Though the Super Bowl will get underway in just hours, the NHL is just about ready to wrap up its second crazy week of action. While some picks have continued to go through the roof, there is a new batch to take the place of those that have regressed a bit. This is a time of year when rosters begin to take shape and Fantasy owners start to get a little skittish. Technically we are about one-sixth of the way through the season already.

It is going to be hard for people to make the tough choices, but this is not a time for the weak. The focus of the NHL Wire Troll is to give quick hitters on the latest players that are causing a stir you may not quite know about. A player like Cory Conacher is now very much known and still wreaking Fantasy havoc. He is showing little signs of slowing down too much and his ownership rates are still climbing well above the 50 per cent mark. Will Conacher level off? Stay tuned.

Compiling the picks this week was a bit tougher than last week, but there was some good value still to be found. Let’s take a look before it is too late.

Alex Galchenyuk, C, Montreal Canadiens: The limited ice time is scaring off most owners, but that is not going to last long. Galchenyuk is Montreal’s second best centre. Let’s face facts: He has six points in his last five games all while only playing 12:24 per game. It’s important to note that in his last two games, he is averaging nearly 15:00 ATOI. The time has come to own Galchenyuk because maybe only Tomas Plekanec is a better centre on Montreal. Galchenyuk has surpassed David Desharnais on the depth chart and his numbers are going to go up. Get on this now!

Todd Bertuzzi, LW/RW, Detroit Red Wings: You may have to be a bit desperate to pull the trigger on this move but Bertuzzi is the only big bruiser on the power play that Detroit really possesses. At this stage of the game, he is not going to fill too many categories but he is going to pot some man advantage tallies at the least. After all, someone has to score on the PP in Detroit besides Pavel Datsyuk and Henrik Zetterberg. Bertuzzi is at least worth a look with less than 10 per cent ownership almost everywhere.

Roman Cervenka, C, Calgary Flames: It is going to take a little while to realize his potential but Cervenka is one of those pretty much can’t miss type of guys. He did have a blood clot in Russia and does have some adjusting to do as far as North American hockey, but he can play with Jarome Iginla and should adapt fairly quickly. The points will come, but so far people are not on board. Cervenka’s biggest problem may be a declining Iginla, but Lee Stempniak and Curtis Glencross may be capable of keeping up with this talent. Patience on this one.

Matt Frattin, RW, Toronto Maple Leafs: Frattin has four goals and two assists. Simply put, he is a sniper and a streaky one at that. While Frattin will not maintain this pace, he is at least worth a grab. Obviously, it’s important to check his line combinations. One drawback with Frattin early on is going to be his defensive responsibilities or lack thereof at times. If he plays with, say, Mikhail Grabovski or James Van Riemsdyk a bit more often, do not be shocked. The kid has talent but he has to refine the other parts of his game a bit to stick in the NHL. That is just how it is.

Ron Hainsey, D, Winnipeg Jets: This is for really deep leagues where ATOI and blocked shots are of a little more importance. Hainsey will get the PT while Zack Bogosian recovers from yet another surgery. Hainsey’s defensive skills are not great but again he gets in front of shots and in some leagues a few points here and there make a difference. This is another move you only make if they are desperate and I mean really desperate.

Luca Sbisa, D, Anaheim Ducks: Here we go with those deep, deep, deep waiver wire pickups. Sbisa collected two assists Saturday (his first points of the season) and if Cam Fowler’s injury is even somewhat significant, that is going to mean better opportunities for Sbisa. At the very worst, the ATOI gets a boost and maybe he stuffs a couple categories a little better for your Fantasy bottom line. The ownership percentage on Sbisa is so low that he should be readily available. It could be worse.

Viktor Fasth, G, Anaheim Ducks: At the beginning of the season, we thought Fasth may be the goalie up with the big club, but he was sent down to the minors for a bit. Well, he’s back now and has looked great with a 1.44 GAA and .938 save percentage. Anecdotally at least, it seems Anaheim plays a bit better defensively with Fasth in net as opposed to Jonas Hiller. There is still a bit of an inkling that Fasth could be the starter at some juncture in Anaheim so it may be a good idea to hold onto him. If he is out there and you have a spot to stash him, now may be the time. You will thank us long term.

Next week we will take a look at a couple of our early picks along with a few new players that will only be found on The Wire Troll.