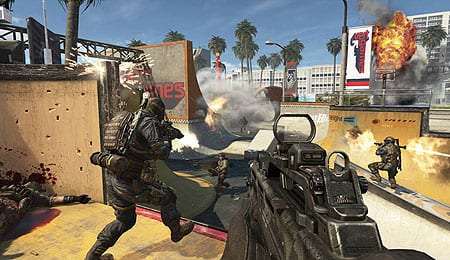 Here’s what happens at the X-Games when they run out of Mountain Dew.

The first Call of Duty: Black Ops 2 map pack to explode onto the scene is Revolution. This includes four adversarial multiplayer maps ripe for any game mode, a new zombie map, Die Rise, and a new mode called Turned that sets the players as the brain-thirsty horde of zombies!

Mirage is a beautiful map set in a sandstorm-blown town somewhere in Asia. Players can take up sniper positions in hotel windows and sand dunes, while the runners are able to use piles of sand as makeshift stairs to access higher levels of structures. Several of the buildings are multi-tiered, so vertical engagements happen quite frequently, meaning you’ll have to watch above you as well as right and left. Visually it feels like the most work was put into this map, with the focus being a hotel lobby flooded with sand surrounding a giant statue of a samurai-type figure. The map is really bright, and the sand often resembles banks of snow, but we’ve got actual banks of snow in another map.

Grind is a superb level for SMG and shotgun runners. The setting here is a skate park full of half pipes, rails and various jumps scattered about. Most of the environment is made of wooden ramps and bowls, with various discreet hallways allowing corner-cutting while carving a path through your enemies. Outside in the sunshine you’ll find more ramps and wacky waving inflatable arm flailing tube men conveniently placed to scare the hell out of you when on a beat run. Clever players will take advantage of the tight hallways to lock down kills, but some of the skate ramps built outside can house a great advantage for sneakier players. Too few places to camp and minimal sniping points will disappoint the marksmen, but that’s why there are four maps in the pack. Oddly enough, there are more bikes laying on the ground than skateboards.

This is probably my favourite of the bunch, as part of the level itself can kill you or provide a tactical advantage. Hydro takes place at the base of a dam, which has a pressure release system in effect. Players caught wading through the middle portion of the map must take caution not to be trapped and drowned by the flood of water released from the flood gates. This map seems to favour the run-and-gun types, but there are plenty of vantage points to be utilized by an efficient and cautious sniper. The most fun on this map is to be had during a Capture the Flag or Domination game, as team death match isn’t as affected by the level’s obstacles.

This map features virtually any other thing you could want from a ski resort, including a log cabin that snipers are going to choose to camp in rather than their usual tents. The ski lift centrally located in the map can serve as a diabolical make-shift cover system, or can even be booby trapped with shock grenades and the like. Again, it feels more tailored to the CTF and DOM crowd, but it also serves as an adequate battleground for death matches.

What could be more terrifying than taking a bus to various locations infested with zombies? Being stuck in a dilapidated skyscraper comes to mind, and with the Revolution DLC we’re treated to one of the most fluid, intense zombie maps to date. Die Rise starts you in a room that is partially destroyed, some countless floors above the surely zombie-infested streets. Still, zombies find their way up and cause headaches. As you and your team make your way through the tower,  you’ll slide down elevator shafts, end up in upside down rooms, or even hallways that belong to other buildings that have come crashing to rest here. As an added twist, the elevator houses a soda machine that can vary each play through, so you really have to know how to utilize every soda effectively, just in case, so you can better your odds of survival.

This new addition to the zombie basket sets three players as zombies against one player assuming the role as a human, albeit temporary. When a zombie kills the human, they switch roles. As a zombie, you move fast. I mean, really damn fast. As a human, your speed is average but you get to use guns. Every kill you get changes the gun you have to something else, but thanks to an unskippable gun loading sequence, it’s not often you get a shot off and survive as a human. So in effect, it’s really fast paced but comes off feeling a little tacked on. Making the players super fast, one-hit-kill machines against one sluggish human feels a little cheap and shallow compared to the otherwise incredibly deep zombie mode they’ve conceived.

There are many more hits than misses in this map pack, and any fan of Black Ops 2 multiplayer or zombies modes will love what Treyarch has put together with Revolution. Four great maps tailored to any play style along with a new zombie map and mode is a great deal for the asking price.