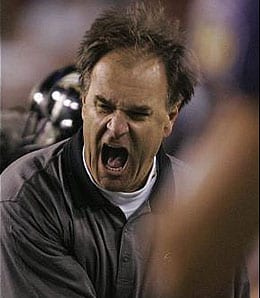 Brian Billick has lost his mind, and Derek Jones can prove it.

Following Week Two, I turned on the NFL Network to see numerous analysts, including Brian Billick, lauding the impressive state of quarterbacking around the league. After two weeks, the composite quarterback rating proved to be 83.9, which at the time was an all-time best for the position.

With so many awful teams around the league, I contend that the opposite is true. I don’t believe that the NFL is in this great state of quarterbacking. In fact, we’re actually in worse shape than 10 years ago. For a team-by-team comparison, let’s go back to 1999 to see just how far we’ve advanced or fallen since the year Kurt Warner came on the scene.

Advantage: Manning. Graham split time with Kerry Collins but did little with a 7-9 Giants squad. He threw nine touchdown passes and nine interceptions in nine starts. How many years did Graham play in the league? You guessed it, nine. Meanwhile, Manning’s passer rating (104.0) trumps the measly 74.6 posted by Graham.

Advantage: ’09 McNabb. While young McNabb did not suffer injuries at the seemingly prodigious rate of current day Donny Mac, the ’09 Eagles will rise and fall with the fortunes of its Pro Bowl quarterback.

Advantage: Aikman. Even though he was playing his second to last season, Aikman got the Cowboys into the playoffs (albeit at 8-8), while Romo continues to disappoint in Dallas. Aikman did not put together a great statistical season, but fired 17 touchdown passes versus 12 interceptions. Meanwhile, Romo is too busy throwing at all-pro corners 16 times during games (see below).

Advantage: Johnson. He made the Pro Bowl in ’99 and led Washington to the playoffs where it won a game and lost by a point in Tampa during the NFC Divisional playoffs. Campbell can only dream of such a season at this point.

Advantage: Batch. Just because you were selected number one overall, doesn’t make you a better quarterback instantly. Batch got the Lions into the playoffs with some assistance from Gus Frerotte. Such a feat is a herculean effort, especially when considering Detroit lost its final four games and still made the playoffs.

Advantage: Favre. While he was on the first downside run, posted a poor 74.7 passer rating and threw 23 interceptions, he was still Brett Favre, just two seasons removed from winning three straight MVP awards. Rodgers is still building his resume and has been spotty in close games.

Advantage: Favre. Coming off the 15-1 season in ’98, Randall Cunningham struggled to return to ’98 form and the Vikes switched to George. He posted 23 touchdowns as the team made a run to the playoffs. Again though, Favre’s mere presence on the Vikings gives Minny a different edge.

Advantage: Ryan. Chandler led the Falcons to the Super Bowl a season earlier, but was a career journeyman otherwise.

Advantage: Beuerlein. The former backup to Aikman in Dallas made the Pro Bowl in ’99 after throwing 36 touchdowns. Delhomme has crafted poor decision making into an art form in ’09.

Advantage: Brees. You don’t need an explanation other than never trust a quarterback with three names.

Advantage: King. As poorly as he played at times, King was a botched officiating call away from quarterbacking a team to the Super Bowl. Meanwhile, Johnson is as green as they come.

Advantage: Warner. An easy victory for Warner. After putting the Cardinals in the playoffs in ’98, Plummer put the Cards in the tank. He threw 24 interceptions and just nine touchdown passes. His QB rating? How does 50.8 sound? Good? Not so good?

Advantage: Kitna. The current caddy of Romo got the Seahawks into the playoffs while Wallace hasn’t done much to distinguish himself. By the way, Wallace is sixth in the league in completion percentage. Scary.

Advantage: Hill. Steve Young got knocked into retirement by Aeneas Williams early in 1999. Garcia wasn’t Garcia yet. Hill isn’t great by any means, but will not cost his team the game.

Advantage: Flutie. Edwards may never sniff the playoffs at this rate, which is what Flutie did…well, until the great Wade Phillips had other ideas.

Advantage: Marino. I’d rather have Marino at age 80 than Henne at this moment.

Advantage: Brady. Bledsoe was a few years removed from a Super Bowl appearance, but entering the downside of his career. Brady, well, is Brady.

Advantage: Lucas. Again, we can’t project ahead towards what someone is going to become. Lucas jumped into a tough spot because of an injury to Vinny Testaverde and nearly got the Jets to the playoffs. Sanchez still has to prove himself.

Advantage: Flacco. The second-year Delaware Blue Hen has already played in an AFC title game while Banks was eventually benched for Trent Dilfer the following year when Baltimore won the Super Bowl.

Advantage: Couch. Look at the numbers. Couch, while awful, actually produced more than Anderson. Outside of his one big year in 2007, Anderson has been dreadful.

Advantage: Palmer. Blake could cause thunderstorms with his deep passes, but Palmer has the ability to make the Bengals respectable. Palmer is trying to become the first Bengal quarterback since Boomer Esiason to lead them to multiple playoff appearances (’88, ’90).

Advantage: 2009 Manning. Besides McNabb, he’s the only quarterback to still be the head guy 10 years later. While ’99 Manning wasn’t shabby, this year he’s on a record setting pace once more.

Advantage: Brunell. He’s the greatest quarterback in Jaguar history, leading them to the playoffs four consecutive seasons from 1996 to 1999. Garrard still needs to put together two good seasons in a row and get the Jags back to the postseason.

Advantage: McNair. Both appeared in Super Bowls, but the late McNair was the heart and soul of the Titans, grabbing co-MVP honours with Peyton Manning in 2003.

Advantage: Griese. He was the first man in during the post-John Elway era. Griese led the NFL in QB rating 2000 while getting the Broncos to the playoffs after a poor ’99 campaign. While he wins game rather consistently, Orton has never wowed anyone and laboured to beat out Rex Grossman in Chicago.

Advantage: Grbac. Cassel has only started 18 games during his career. Grbac was a pretty serviceable signal caller for the Chiefs, getting them to the playoffs in 1997.

Advantage: Gannon. A Pro Bowler in ’99, Gannon would embark on a three-year run after that season that included two AFC title game appearances, a trip to the Super Bowl and losing some playoff game in Foxborough, Massachusetts. Russell is just plain awful.

Advantage: Rivers. The ’99 Chargers were on the way to winning the LaDainian Tomlinson sweepstakes in 2001. Meanwhile, Rivers directs one of the best offenses in the AFC.

Synopsis: 1999 wins 17-14. While ’99 was a Brady-free zone, it was bursting with eventual or previous MVP winners (Favre, Gannon, Marino, McNair, Peyton Manning, Warner). During 2009, it’s more top heavy perhaps than ’99, but the difference between the haves and have nots this year is downright frightening.

1. Don’t throw at Champ Bailey 16 times in a game when armed with average receivers: Romo took it upon himself to throw at Bailey, one of the NFL’s best corners, on 16 occasions. Bailey intercepted him once near the goal line and broke up two plays in the endzone on the game’s decisive drive.

2. The Cowboys miss Terrell Owens: Dallas wide receivers have not scored a touchdown since Week One in Tampa. Also, Romo threw twice to Sam Hurd on goal to go plays from the two in the fourth quarter last Sunday. Enough said.

3. Owens misses the Cowboys: Owens owns just one touchdown this season and seems ready to snap at any moment. Who can blame him though? Trent Edwards makes Romo look like Johnny Unitas.

4. Say what you want about Aaron Rodgers, but his offensive line stinks: Rodgers threw for 384 yards, but was wearing Jared Allen and the Viking defense by game’s end.

5. Peyton Manning is the MVP: Manning is arguably playing the best football of his career and is on pace to shatter Dan Marino’s record for most yards in a season (5,084).

6. There are more bad teams than a season ago: Detroit, Kansas City and St. Louis were in a class by themselves last year, but in ’09 they have company as league bottom feeders. Oakland has somehow regressed further thanks to JaMarcus Russell; while Tampa Bay and Buffalo are embarrassing to watch. Just think — I didn’t include the 0-4 Titans or 0-3 Panthers in the discussion.

7. The finger pointing and excuse making is never going away in San Diego during the A.J. Smith regime: Surprise, surprise. There is controversy in San Diego. General Manager Smith called the team soft. Mr. Smith has a point. They are extremely talented, but fatally flawed. This group will never get to the Super Bowl.

8. I’m not saying you should cut LaDainian Tomlinson, but it’s over: Speaking of the Chargers, LT can’t cut it anymore. It’s sad to say but he reminds me of the 2000s version of Emmitt Smith.

9. I’m saying you should cut JaMarcus Russell and it is over: Jeff Garcia recently questioned the work ethic of Russell, who is sporting a quarterback rating of 42.4. Russell continuously wears a wool ski cap on the sidelines. Maybe he should switch hats and cool off that brain of his.

10. Minnesota QB No. 4 still has it: The Packer defense set its sights on slowing Adrian Peterson and got beaten repeatedly by Minnesota QB No. 4. It didn’t hurt matters that he got up to seven seconds in the pocket on some plays to throw.

1. Adrian Peterson (1) – It was Minnesota QB No. 4, not AP, who delivered the daggers to Green Bay on Sunday night.

2. Peyton Manning (6) – For the first time in his storied career, Manning has opened the season with four consecutive 300-yard days.

3. Drew Brees (2) – Do you hear the panic in the streets? Two straight games without a touchdown pass? Folks, he can’t play Detroit every week.

5. Reggie Wayne (7) – He is probably licking his chops for the upcoming Indy/Titans tilt.

6. Frank Gore (8) – I moved him up because I refuse to put a back that runs out of the wildcat ahead him.

7. Ronnie Brown (NR) – No offense, Ronnie, but the expiration date on this gimmick offense is coming soon. Good season so far though!

8. Andre Johnson (8) – The NFL schedule maker wasn’t that kind to Johnson. He has faced Darrelle Revis, Cortland Finnegan and Nnamdi Asomugha thus far. He throttled Tennessee, but has struggled otherwise.

9. Ben Roethlisberger (NR) – When he is not busy doing bits with Chris Jericho and the Big Show on Monday Night Raw, Big Ben is a pretty fair quarterback.

I enjoy Facebook. However, the litany of applications for the site is becoming borderline absurd. From Farmville to YoVille to Mafia Wars, please just make it stop. I’m not interested in being kidnapped, sending you a blender, or starting my own farm. Then, of course, there is the phenomenon of old high school acquaintances friending you when they did not want to be within the same 20-mile radius during your four years together in school. Unfortunately though, that is a whole other post. This gentleman does a fair job of explaining my feelings.