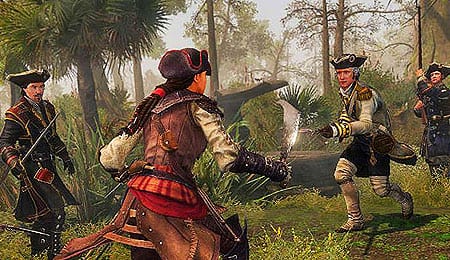 Liberation brings Aveline’s only adventure to consoles with HD graphics.

Countless gamers picked up Assassin’s Creed 4: Black Flag over the holiday season, and since that particular game references the Assassin’s Creed: Liberation experience, it makes sense that the HD remaster of the original Vita game has made it into a downloadable HD upgrade. At the budget price of US$20, is it worth your investment? Let’s take a closer look.

If you’ve played previous Assassin’s Creed games, you’ll be right at home with Liberation. The controls are essentially the same, though you’ll find variations in responsiveness. New hero Aveline de Grandpre feels more nimble and less lumbering than AC3’s Connor and it makes sense that this was a conscious decision given her body type. It’s also very refreshing to see a strong lead female of realistic proportions — something we’re seeing more often these days — but still not enough.

Of course, this was originally a Vita game and is only a 2 GB downloadable game, so it makes sense that Liberation doesn’t feel as finessed as other games. There’s a new chain kill mechanic that was originally designed to work with the Vita’s touchscreen, but ultimately comes off as clunky on a console controller. Climbing isn’t nearly as smooth as the last two games in the series, and something about the countering timing just feels off. Aveline also gets a bullwhip at one point and there are a few combos unique to that.

Despite these minor additions, it’s the Assassin’s Creed you know and love, and there aren’t any major leaps forward in control design.

Ubisoft has upgraded Liberation’s graphics from the original Vita version. Details and textures on the models are significantly better, and most of the characters look on par with Assassin’s Creed 3’s main characters, though they’re definitely below the current iteration of Assassin’s Creed 4: Black Flag. Aveline looks great, however, lighting and water effects look like they’re a few generations behind, and during close-ups, you’ll see hiccups and weird shading pasted on top of the highly detailed main character.

The environment of New Orleans and the surrounding bayou, along with a trip to Mexico, look like the series should, which is good and bad. The backgrounds and buildings have more screentear and pixelation than games developed on consoles, but they still capture the aura of their respective areas well.

Given that Liberation is an HD upgrade, these graphical issues aren’t exactly surprising and can mostly be ignored given the context of the game’s price and origin.

The voice acting is top notch, and it’s obvious that Ubisoft hasn’t spared any expenses there. Aveline’s accent is consistent and her performance is lively. A lot of this comes from the writing, which makes a much more inviting protagonist than AC3’s surly Connor. The biggest compliment we could probably give Liberation is that we cared about Aveline’s journey enough to wish that she got a proper console outing.

Liberation is probably the most streamlined of any Assassin’s Creed game since Altaire’s original adventures. However, unlike previous adventures, this game features no present-day gameplay, which is probably a relief to a significant portion of the fanbase. Instead, you’ll get Aveline’s story as she learns about her past and her role in the AC universe. Much of this comes through standard series tropes, such as eavesdropping missions, climbing up to viewpoints, and of course, assassinations.

The story missions are all standard fare, though they don’t really take advantage of the unique era or surroundings. Aveline, though, gets a unique mechanic that integrates both her race and gender into gameplay. She can change between three outfits: a standard Assassin outfit, a high-society dress, and a pauper’s getup. The new options give Aveline bonuses and penalties in stealth, movement, and the ability to charm susceptible men. Some missions require specific costumes but most of the time you can customize as long as you’re near a changing room.

As the missions were designed for the mobile experience, they tend to feel more bite-size and just plain easier. However, that takes away some of the fun of the game and it’s pretty easy to breeze through the main campaign. And though the series has become known for its amazing depth of optional gameplay modes and areas, Liberation is very much a tunnel-like experience without, say, the boat battles of the past two console games.

While this is partially understandable, it does feel like there were other ways to integrate new gameplay modes that take advantage of Aveline’s persona and the New Orleans/bayou setting. A quick look at the insanely deep Metal Gear Solid: Peace Walker (for the PSP, no less) and you can see that it’s possible to insert these side modes while fitting the constraints of the mobile system.

Assassin’s Creed: Liberation is the leanest, most streamlined series experience since the original game. It succeeds by bringing an interesting and engaging new protagonist (and true to the series’ roots, a story that sometimes veers off the rails) but its overall lack of anything new or side activities means that it’s something you probably won’t revisit unless you want to spend more time with its unique hero. But given the US$20 price tag, it’s definitely worth the cost of entry.

On the bright side, naval combat feels much improved. You have three different speeds at which to navigate the ship, and your full complement of weaponry is used contextually based on how you position the camera. For example, looking straight ahead allows use of mortars or a chain shot. Tilt until you’ve got a starboard or port view, however, and you’ll be firing cannons; look behind and you’ll drop explosive barrels into the water. Disabled vessels can be boarded if you come up alongside them, and outside of some trouble gauging distance between ships, it worked well.